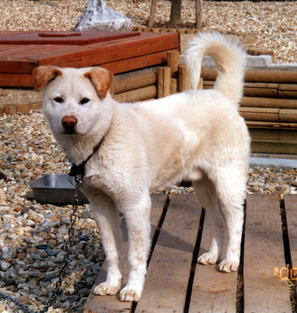 Of the three dog breeds native to Korea (more, if you count landraces), the Pungsan is said to be the rarest. Sometimes written as Poongsan, Phungsan, Phoongsan, and Poongsan gae, this spitz-type dog originated from an area now controlled by the North Korean government.

Wars and politics make verification of the breed’s origins difficult. Some say it descended from wolf x dog breedings. Others, citing a similar hunting style to the Laika dogs of Siberia, say it came from these dogs. More still believe the breed was developed as a large-game hunting dog during the Joseon dynasty (1392 – 1897).  Yet another theory has ancestors of the Pungsans tamed by Koreans during the New-Stone Era, dogs that were ultimately left isolated in the Baiku Mountain. We may never really know.

What is more certain is that the breed was decimated by war, poverty, and Japanese occupation (approximately 1910 to the end of WWII). It’s unfathomable how many Pungsans were slaughtered to provide fur for coats worn by the Japanese army in Manchuria.  According to one source (ironic, if true),  it was during the Japanese occupation of Korea that Japanese zoologist, Tamezo Mori, submitted research findings linking the Pungsans to Japanese breeds, and thus advocated for its protection because of that connection, an attempt, perhaps, to obliterate Korea’s culture and recast its best parts as Japanese.  Other sources don’t mention Mori at all. Either way, the Pungsan was declared a Korean Natural Treasures in 1942. 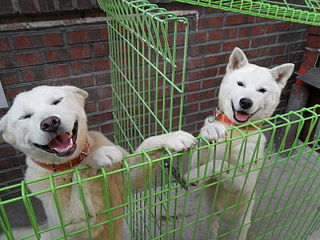 The Korean war only made things worse. By the end of that conflict, Korea was officially divided into the two separate countries, and Pungsans were confined to the north. The North Korean government forbade the dogs to be taken out of the country. It wasn’t until South Korea’s “Sunshine Policy” of engagement with the North, that North Korea gifted a pair of Poongsan puppies to then-President Kim Dae-jung, the female of which eventually whelped a litter of puppies.

The last we’ve read is that the dogs were sent to live at the Seoul Grand Park Zoo where they were carefully bred, their lines  monitored.  Generations of Pungsans puppies have been produced there, some of whom have been sent to other South Korean zoos, others in private homes of South Korean dog enthusiasts.

Image of Pungsans by Maeng9981 from Wikicommons under the Creative Commons Attribution-Share Alike 3.0 Unported license.

3 thoughts on “The Rarest of the Korean Breeds”