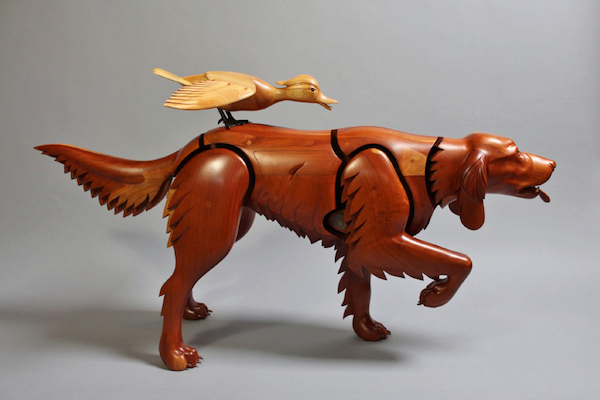 The Spaniel family is very old, and the fact that it has within it some of Europe’s oldest gundogs may surprise people who never thought of Setters as members of the Spaniel family. That said, most experts generally concur that setters descended from older land spaniels that existed in Britain in the Middle Ages. English Setters were originally called “Setting Spaniels,” while the Irish Setter is speculated to have descended from a blend of Irish Water Spaniel, Old Spanish Pointer, Irish Terrier, and, according to other theories, a bit of Bloodhound, Talbot Hound, some Gordon Setter, and maybe even a bit of leprechaun. As old as we know the breed is, very few records of its ancestry have survived, and we’ll likely never know it’s precise origins.

Image: “Bird Dog” (2003) made of cherry and birch, bronze and copper by the incredible craftsmanship of James Mellick
http://www.jamesmellick.com/