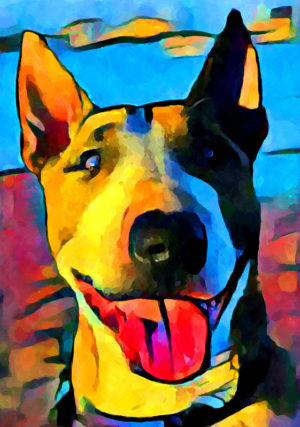 We would be hard pressed to improve upon the phrase crafted by Dr. Bonnie Wilcox and the talented writer, Chris Walkowicz, to describe the Miniature Bull Terrier: “The Miniature Bull Terrier is all the fire and clowning of its larger version seen through the reverse side of a magnifying glass. The description appears in their book, The Atlas Of Dog Breeds”

Like its larger version, the MBT is the only other breed in the world with an egg-shaped head and triangular eyes. Like his quart-sized counterpart, this pint sized Bully likes to sit on his haunches in a position known as the “bully sit,” as well as project his hind legs behind him making him look like a torpedo (most of us call this position, “frog legs,” though according to the breed club, it’s properly known as a “sploot”).

The Miniature Bull Terrier is not a new breed! Breeders started to work on miniaturizing Bull Terriers shortly after the 1830s, and by 1914, there was a range of weight defined (it was 12 pounds). Sadly, Minis were falling in numbers less than ten years later.  The weight limit was “upped” to 18 pounds with the thinking that breeders would expand the gene pool of their breeding dogs.