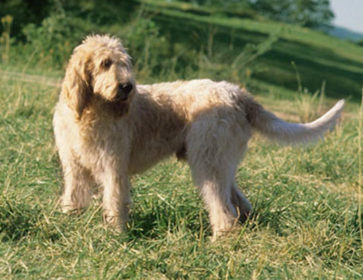 Land use is becoming more restricted all over the world, and especially so for land on which to hunt. France is no less limited on this front than any other country. In modern times, working with hunting dogs whose style is to follow prey for hours on end ultimately ends with hunter and dog running out of real estate. Such an environment is in very short in supply, and it’s becoming a luxury to see a hunting breed do what it was created to do.

The Grand Griffon Vendeen, a passionate and dedicated hound, is the rarest of the hunting Vendeens. Breed fanciers voice concern for the future of this old hound that comes from a branch of the “family tree” of Vendee, one of the oldest varieties in France. Indeed, so rich is the Grand Vendeen’s ancestry that among its first breeders was a clerk working for a 15th century King. “Greffier” is French for “clerk,” and it’s not a stretch to see that “griffon” was a manifestation of “greffier’s dog.”

The United Kennel Club recognized the Grand Griffon Vendeen in 1996.

Image of a Grand Griffon Vendeen found on Pinterest and happily credited upon receipt of information. Another photo of the breed may be seen here.

One thought on “Running Out of Space”