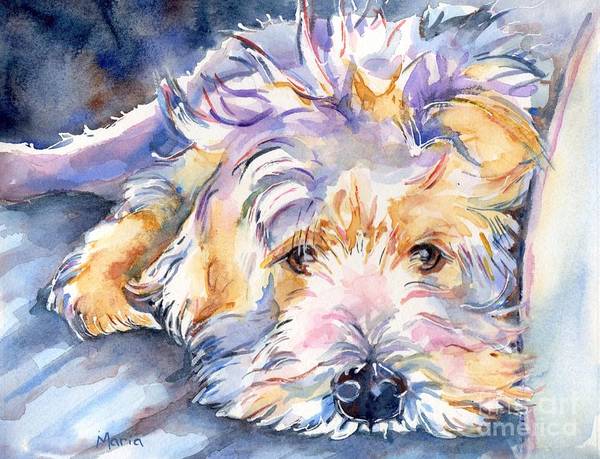 Scroll down to see the briefest of videos that sets the theme for this post:

If there was ever a Rodney Dangerfield in the purebred dog world, it might have been the Soft Coated Wheaten Terrier. As far back as 1785, Wheatens were found all over Ireland, particularly in the south and southwest, but they were owned by poor tenant farmers forbidden to own any animal of greater value than five British pounds. While freemen and landowners owned hunting dogs, spaniels and Beagles (breeds that by law were reserved for the gentry and pampered by comparison), Wheatens lived a hardscrabble life. They whelped in haystacks and barns, and probably ate whatever they hunted. Their tails were docked because only the upper class could own dogs with whole tails, and they had to be a certain size because again, only the wealthy could own a dog taller than nineteen inches. Despite their versatility and value to their poor owners, Wheatens got very little respect and came to be known as the “poor man’s Wolfhound.” The Wheaten wasn’t even recognized as a breed in its own country until 1937.

Respect wasn’t forthcoming when the first Wheatens came to the US in the 1940s, either. In November, 1946, a litter of Wheaten puppies arrived from Belfast, and two of them were given to Lydia Vogels. She showed the youngsters at Westminster Kennel Club Dog Show the next year, and though the pair produced seventeen puppies, there was little interest in them. It’s hard to imagine now, given that we know how fabulous the breed is, that it would be another twenty-six years before the AKC oficially accepted the Soft Coated Wheaten Terrier, and it finally got its deserved recognition.

Sadly, the breed currently appears on The Kennel Club’s Vulnerable Breeds list. Only 291 puppies were registered in 2019, evidence of a steady decline from 2015 when 423 dogs were registered. In its country of origin, this is not a good direction for a breed that is happy, friendly, deeply devoted, and just stubborn enough to make things interesting.

Image: Wheaten Terrier Painting by Maria Reichert is available for purchase as fine art, and in lifestyle and home decor items here.