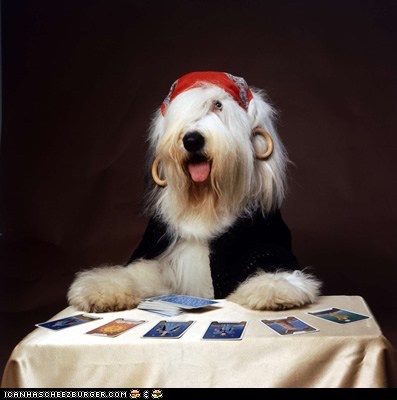 These days,  the name, “gypsy” is regarded by some to be an ethnic slur when referring to a particular group of people whose distant origins lie in India, but it started out as a mistake. Europeans incorrectly thought these folks were from Egypt; “Egyptian” morphed into “gypsy,” and it stuck.  Our goal, however, isn’t to examine the etymology of the name, but to offer a quick glimpse into the actual, or perceived role that the Romani people had in the histories of various dog breeds.

The Romani (also written as Romany) primarily settled in Eastern Europe, but their’s was a traveling culture that supported itself with seasonal work, trade, street performances, and fortune-telling. It was through the Romani that several breeds were seen in parts of world that might never have seen the dogs at all had they not accompanied these people. The Bedlington, for example, was said to travel with Romany who used the dogs to poach game on estates they either camped on, or passed by. The breed’s talent in eradicating land of vermin drew the attention of the local squires who acquired some of the dogs for themselves.

One source has suggested that Romany who made a living through entertaining were very fond of incorporating performing dogs into their acts, and that it was they played a large part in the wide distribution of the Poodle. There was even the theory that as the Poodle became increasingly popular with these performers, its shape began to change. The dogs needed to be faster and have more agility, qualities the dogs didn’t have with their retriever shape. The breed became increasingly square, proportions now written into the breed’s AKC standard: “General Appearance: Carriage and Condition – That of a very active, intelligent and elegant appearing dog, squarely built…”
Few breeds have a more disputed heritage than the Dalmatian. Some historians believe the breed’s origins are in a province of Austria on the Eastern shore of the coast of Venice, a place called Dalmatia. Other historians have the breed originating in India which may be how the Romany knew of the breed. More certain is the fact that Dalmatians were frequently found in bands of Romanies that treasured the dogs for their flashy markings and enthusiasm for fun. As mentioned earlier, these were traveling people who carried their possessions in horse-drawn wagons, and as such, covered miles and miles. It makes sense that a dog with an affinity for horses and the stamina to run alongside them would be part of that culture. As Dalmatians traveled throughout Europe and Asia, they eventually arrived in Europe perhaps in the late 18th century. It’s likely that this is how the British upper class found the dogs and brought them home.
Other breeds we’ve seen in connection with Romany are Whippets, Yorkshire Terriers, and even Dandie Dinmont Terriers, though factual accounts are harder to come by. If and when we do find anything, watch this space!
Image of Duke the Dulux Paint Dog reading Tarot Cards from 1981 found on Pinterest and happily credited upon receipt of information