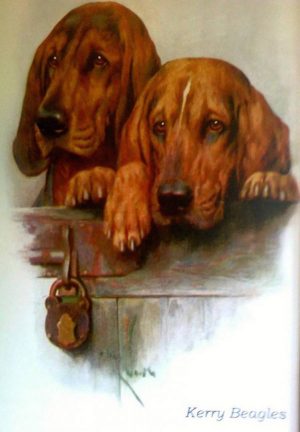 Sadly, the great hunger in Ireland of 1847 decimated the Kerry Beagle breed, and only the famous Scarteen dogs in the Ryan family’s kennel in County Limerick survived. To restore the breed, it’s said that the Braque de l’Ariege was recruited to bolster the gene pool, and today, Kerry Beagles are now considered by some to be the only scent hound native to Ireland that’s still in existence.

This is noteworthy and important to those of us who value history and a legacy. The Kerry Beagle isn’t just one of Ireland’s most ancient dog breeds. Many cynologists think that next to the Irish Wolfhound, it is the oldest native Irish dog breed. It’s been generally assumed that the dog referred to as “Gadhar” in Old Irish texts may actually be the direct ancestor of today’s modern day Kerry hound, dogs that arrived in Ireland with the Celts and were refined over time by crosses with Southern and French hounds. Kerry Beagles were so valued by royalty and warriors that they were portrayed in Celtic jewelry, and mentioned in Irish legends and myths.

An interesting book, In Search of the Kerry Beagle written by Stanislaus Lynch, the only Irish writer to be awarded two Olympic Diplomas for the Literature of the Chase, details the story of the author’s search for the origins of the Kerry Beagle. The book is described as generously illustrated with photos of hunting packs and hounds of the past and the present.