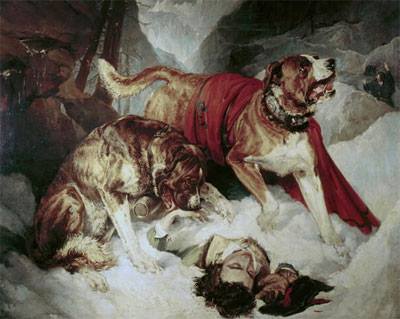 “The famed brandy cask is a myth. It probably began due to the fact that the last traveler, once found, was usually offered brandy by the Augustinian Brother who accompanied he search dog. But the Brother carried the brandy, not the dog.” – Monks of New Skete, “How To Be Your Dog’s Best Friend.”

Author, Matt Soniak, writes that the brandy barrels seen around the necks of Saint Bernards was the invention of the artist, Edwin Landseer, who, as a 17-year-old in 1820, painted, “Alpine Mastiffs Reanimating a Distressed Traveler.” The painting shows two Saint Bernards standing over a fallen traveler, one dog barking in alarm, the other attempting to revive the traveler by licking his hand. The dog doing the licking has a barrel strapped around its neck, which Landseer claimed contains brandy.

Soniak continues, “Despite the fact that brandy wouldn’t be something you’d want if you were trapped in a blizzard — alcohol causes blood vessels to dilate, resulting in blood rushing to your skin and your body temperature decreasing rapidly — and that the dogs never carried such barrels, the collar keg stuck in the public’s imagination and the image has endured.”