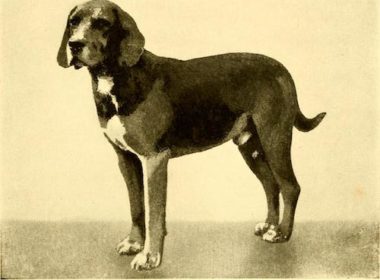 The Kerry Beagle has a misleading breed name.  Neither a Beagle nor a relation of the Kerry Blue Terrier, the breed may not have even been developed in County Kerry in Ireland, but it is an ancient dog dating back to the 16th century (detailed pedigrees have been found dating back to 1794). It also comes with a marvelous legend: When Noah’s ark came to rest against Galtymore, the highest peak in Tipperary, two black and tan hounds scented a fox or rabbit and jumped off the ark in pursuit, never to be seen again. Sometimes there’s a germ of truth in these old folk tales: Cynologists believe that the Kerry Beagle was one of the first dogs used exclusively to hunt hare.

The breed may have been created by crossing an ancient Irish hound with the Gascon-Saintongeois – or possibly the Grand Bleu de Gascogne from the south-west of France, the continental strain predominating.  The English foxhound would come to supplant the Kerry Beagle among the Anglo-Irish gentry, but we might not even be writing about the breed today had it not been for Scarteen House, home to the Ryan Family since 1798. The Ryans were a prosperous Catholic tenant farming family with Jacobite antecedents –  and they were patriotically loyal to the hound indigenous to their country. 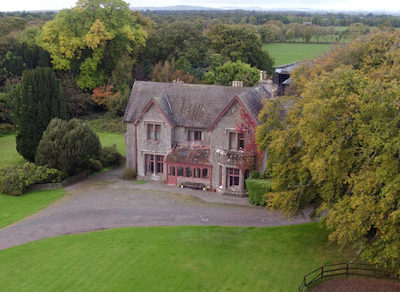 Irelands’s Great Famine of 1845-49 was devastating to most animals in the country, the Kerry Beagle no exception. Only Scarteen House situated on the Limerick/Tipperary border was able to maintain and continue breeding a few Kerry Beagles. There were scattered hound packs over different farms throughout west Munster,  but by 1881, the only kenneled pack in Ireland was at Scarteen House.

Enter John Ryan, born in 1871.  As an adult, John was an astute breeder who chose to ignore the prestigious English Foxhound strains in favor of Irish bloodlines. It was a decidedly unfashionable thing to do at the time. He scoured the counties of Clare and Kerry for suitable bloodlines, and flatly refused to use any dog with even a hint of foxhound blood because he felt they were as good as a different breed. The Kerry Beagles that John wanted to maintain were affectionate, independent, and disheartened by unfair discipline. They weren’t as fast as the Foxhounds in open land, but they were better adapted to a countryside dotted with banks and hills.  And their voices! Long, melodious yowls that resonated during a chase was music!

Thady Ryan, John’s son, took on the responsibility of the hounds that had been in the family for 400 years, and before his death in 2005, he relinquished mastership of the pack to his son, Chris.

Chris Ryan’s family continues the tradition of preserving the dogs famously known as the  ‘black and tan hounds, an appellation given to the infamous British auxiliary police forces dispatched to Ireland during 1920–21.  The Scarteen dogs are now not only the oldest in Ireland, but they are the only Kerry Beagle pack that is hunted mounted (which is to say that they accompany hunters on horseback. The hunters, not the dogs). Most Kerry Beagles today can trace their ancestry to the original 19th century breeding pack at Scarteen House.

The Irish Kennel Club officially recognized the breed in 1991, but the dogs are still extremely rare outside of Ireland, nor has the breed yet been recognized by any major kennel clubs.

A marvelous account of Thady Ryan and his family can be read here, while some lovely photos of the dogs can be enjoyed here. Finally, those interested in the breed should read, “In Search of the Kerry Beagle,” by Stanislaus Lynch, the only Irish writer to be awarded two Olympic Diplomas for the Literature of the Chase at the London Games in1948, and Helsinki in 1952.