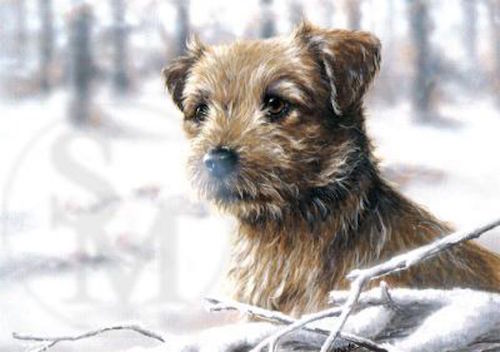 At least one person has called the Border Terrier, “the thinking-man’s terrier,” but don’t think this means “this dog can’t hunt.” One source says Border Terriers have earned more AKC Earthdog titles than any other breed of terrier. The Border Terrier’s ancestors were required to tread over tricky rocky areas, as well as swim under treacherous peat moss bogs of Northumberland to find prey hiding in a dry spot. This smallest among long-legged terriers also had to be fast enough to match a horse’s pace, but small enough to dig out or follow a fox into its burrow. We don’t doubt that today’s Border Terrier retains the instincts do the job.

That all said, the Border Terrier possesses the dynamic terrier temperament that we love about terriers, but this one doesn’t tend to pick fights without good reason, neither does s/he forget an enemy in a hurry, either – and that reveals a breed that puts its little gray cells to use. It’s very easy to inadvertently teach this breed a behavior her owner may not love, but it comes with the territory in living with a Border Terrier. These dogs have long memories, and enthusiasm for learning is one reason a lot of Border Terriers have appeared on TV and in the movies. Humphrey Bogart’s dog, “Zero,” in the films, “High Sierra” and in “Law of the Timber” was a Border Terrier.

Image: “Border Terrier in the Snow” by Paul Doyle
https://www.facebook.com/PaulDoyleArt