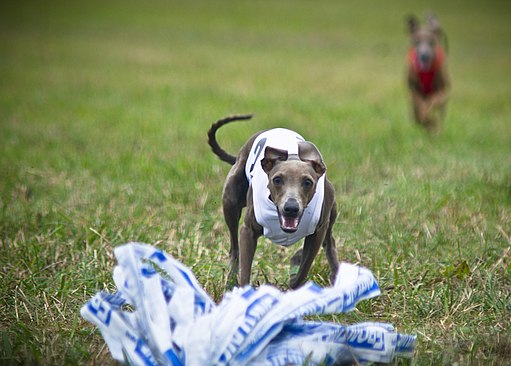 Ten miles from the center of London is a 170 hectare of open water, marshes, trees and grassland historically known as the Welsh Harp, though today it’s also called Brent Reservoir. In winter, the shallow ends freeze over and attracts geese, ducks, and wading birds, and in the spring, wild flowers bloom in the marshes and singing birds break the stillness.  It is in this setting that the first recorded Greyhound race was held in 1876. Two Greyhounds chased a mechanical rabbit across a field for 400 yards in a straight line, a rail having been laid in the grass.

Coursing enthusiasts on hand to watch that day were not impressed. Their sport was judged using a complex system of points which also considered the different attributes of the dogs over the span of the contest. The notion that a dog could win a race only because it got to a target first was to them a joke, if not a contemptible one. Pity that someone wasn’t on hand to tell these spectators that speed contests between pairs of Greyhounds were occurring 7,000 years before, or that it was under one of their own monarchs, Queen Elizabeth I, that Greyhound racing in England was established and became known as the “Sport of Queens.”  As we know it today, Greyhound racing originated in America with the ingenuity of a South Dakotan engineer, Owen Patrick Smith whose invention of a mechanical lure around 1912 made him recognized as the father of modern Greyhound racing.

That said, coursing is probably the oldest of all canine sports, and was popular with both the ancient Greeks and Romans. It remains no less popular today. The Irish Coursing Club was established in 1916 and today consists of 89 affiliated clubs from Ireland and Northern Ireland. In the states, the American Sighthound Field Association founded in 1972 is the first nationally known association for lure coursing, and boasts nine regions. On its website, in fact, a map indicates where one may find a coursing club in their own state. The American Kennel Club has officially sanctioned the sport since 1991.

An easy-to-read primer on getting started in coursing can be read here.  Coursing isn’t just for sighthounds anymore. Many recreational coursing clubs have been established that welcome dogs of any breed. If your dog courses, show us their picture!