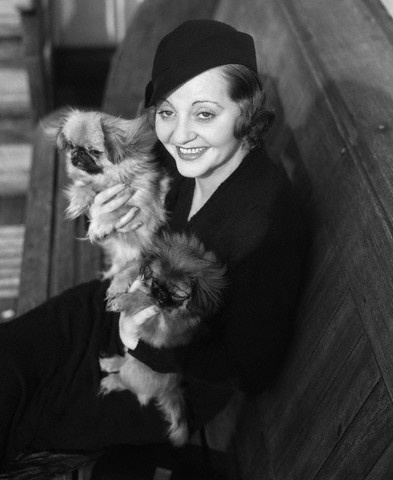 It’s time to get you in the mood, and while we couldn’t find good video, “the voice” should be enough to get you there. Keep scrolling down until you reach the video:

Tallulah Bankhead was vampish glamor personified, but she wasn’t above dropping lines like, “I’m pure as the driven slush,” or “If I had to live my life again, I’d make the same mistakes, only sooner.”

She was known for a raucous laugh, her husky

voice (no doubt enhanced by chain smoking and a fondness for Kentucky bourbon, but actually caused by a bungled tonsillectomy at the age of five), calling most people, “dahling,” and bohemian behavior that included peeling off her clothes to chat in the nude. What must her father have thought, he, the Speaker of the United States House of Representatives between 1936 and 1940?

This femme fatale was also a dog lover. She once said, “I’ve been pet-drunk for as long as I can remember. For thirty years, I’ve been over-Pekingesed. Those little flat-faced, bow legged, soft coated dogs enchant me.”

Bankhead actually owned several breeds including a Maltese, a wire-haired terrier, and a Sealyham Terrier she’d been given in 1944 by Alfred Hitchcock after they’d finished filming “Lifeboat,” during which time she’d gotten pneumonia (she named the dog Hitchcock). Her first Pekingese was “Napoleon,” and it was with her Pekingese that Cecil Beaton portrayed her in a drawing.

On December 12, 1968, she passed away far too young at the age of 66, the cause of death listed as double pneumonia complicated by emphysema and malnutrition.

One thought on “The Vamp was “Pet-Drunk””