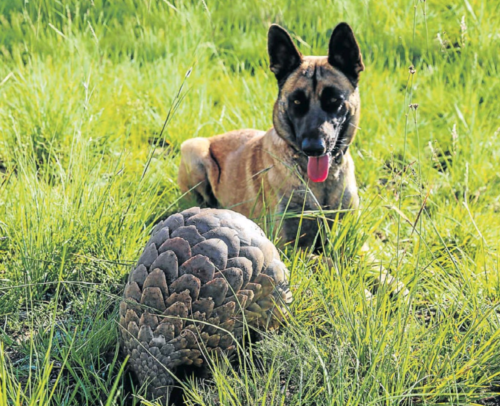 The venerable ‘wise old man’ of the African bush is not a dog, but a mammal found in Asia and Sub-Saharan Africa called the Pangolin.  It is the only mammal wholly-covered in scales which it uses for self protection as it curls up into a roly-poly ball when frightened. Sadly, the scales are not enough to protect the critter from its worst enemy: Man.

Nicknamed the “walking pinecone” and “modern-day dinosaur,” the Pangolin is the most poached mammal on the planet. For every 200 tigers and 1,000 Rhinos trafficked each year, 10,000 pangolins are smuggled, accounting for as much as 20% of all illegal wildlife trade.  In fact, the IUCN SSC Pangolin Specialist Group reports that a pangolin is snathched every five minutes. Trafficked by the ton, this animal could go extinct before most people even realize it exists. They are traded frozen and alive, and are sometimes mixed with frozen fish or snakes as cover.

Harvested for cultural or traditional beliefs that include smoking their scales to improve cattle health, neutralizing witchcraft and evil spirits,  using the blood and scales as healing remedies, and sometimes as a source of protein in the bush meat trade, pangolins are also said to be totems of good luck and bringers of rain (some tribes believe a sighting of the scaly mammal indicates there will be a drought, and the only way to prevent it is by killing the animal).  Sadly, the pangolin is also high-end delicacy in China. Indeed, some are of the belief that it wasn’t a bat that was a source of COVID 19, but a pangolin from a wet market.

To bring attention to the plight of the insect-eating pangolin, “Randal,” the same chap who brought us the 2011 viral video, “The Crazy Nastyass Honey Badger,” (bad language alert) made a new video in 2014, “Honey Badger Narrates: The Mysterious & Endangered Pangolin” you can watch below:

Preserving the pangolin conservation is not only related to the species but also to the communities of people that share this illusive and understudied animal’s habitat.  A number of conservation groups have been working to save the animal, including the African Wildlife Foundation, the Essex Wildlife Trust, the Wildlife Justice Commission, and the IUCN SSC Pangolin Specialist Group.

And yes, conservation dogs are helping, and they’re effective!

Looking after pangolins isn’t easy, and depending upon the country, peak survey months are often when vegetation is high. Dogs provide additional support to ecologists by surveying hard-to-reach areas such as river banks. The dogs can detect the presence of species in the hardest to reach parts of habitats with minimal disturbance. The dogs are also almost impossible to trick.

The African Pangolin Working Group has “Havoc,” a Belgian Malinois who is the world’s first pangolin anti-poaching detection dog (he’s the dog appearing in the pangolin in the thumbnail image). Trained by Paramount K9 Solutions, Havoc can detect the scent of all four African pangolin varieties in transport containers and baggage in heavily trafficked arenas, such as airports. He caught his first poachers in August, 2018.  See more photos of Havoc here.

Canines for Conservation formed by the African Wildlife Foundation in 2014 trains and deploys detection dogs to trafficking checkpoints such as airports, border crossings, and sea ports to find illegal wildlife shipments such as pangolins. Employees of wildlife authorities in Tanzania, Kenya, Uganda, Mozambique, Botswana and Cameroon are matched with dogs, and two breeds have been found by the group to excel as detector dogs: Belgian Malinois and English Springer Spaniels. Read more about them here.

Enviro-dogs works with the Singapore Zoo, and also with conservationist, Louise Fletcher, a pangolin specialist after she approached Ecology dogs to train Springer Spaniels to survey and monitor Sunda Pangolins on behalf of Wildlife Reserves Singapore and the IUCN Pangolin specialist group.

These are just a few of the groups galvanized into action in attempts to save the pangolin, but more needs to be done. In 2016, a treaty of over 180 governments announced an agreement that would end all legal trade of pangolins and further protect the species from extinction, but illegal trade continues. And just this month (June 2020), China increased protection for its native Chinese Pangolin which closed an important loophole for consumption of the species in-country. Additionally, the government will no longer allow the use of pangolin scales in traditional medicine (a big win since some 195,000 pangolins were trafficked in 2019 for their scales alone [Challender, et. al, 2020]), but customs are hard to break in people who have practiced them for many generations. Let’s hope for the success of the dogs in saving these solitary, nocturnal mammals.