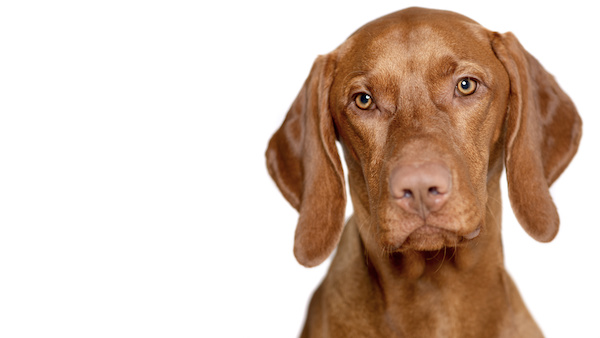 “Blunt” and “chiseled” appearing in the same sentence would seem to be at odds with each other, but the Vizsla’s Illustrated Standard as provided by the Vizsla Club of America includes both words when describing the uniqueness of the Vizsla head among sporting breeds. The head is somewhat of a blunt wedge, but it is defined by chiseled orbital bones.

When a Vizsla’s face is viewed from the front, it has only a slight taper of the muzzle, and there is a strong, important relationship between the length of that muzzle and the depth of skull. The former blends gently into the latter. A slight “smile” line at the corner of the mouth of the lower lip helps soften a powerful underjaw –  deep and squared off at the bottom when viewed in profile. This helps us understand how the breed’s head can be lean and muscular, but still give the dog a soft, gentle, and pleasing expression.We mean no disrespect to breed or man, but we are reminded a bit of the actor, William Defoe, famous for his chiseled features, which, were it not for certain aspects of his facial contours would be unappealing in its hardness. Instead, Defoe’s face can exhibit warmness, menace,  doubt, or just “chill.”

The Vizsla head is clean, elegant, and distinguished, but its face is capable of subtleties made possible by the complexities of the Vizsla’s head. It must be this that imbues the breed with an arsenal of facial bearings, from unimpressed and blitheringly happy, to questioning, disgusted, and perplexed.  How many breeds can claim to have so many nuanced expressions?