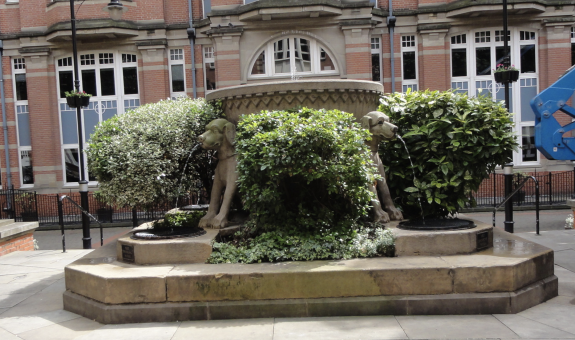 We credit reader, William Hutchinson, for alerting us to a marvelous fountain located near Leeds in the UK.  Today, the fountain is known as the Talbot Hounds Fountain, and at the risk of stating the obvious, it is so known for the four Talbot Hounds that hold up the fountain bowl and spew water out the their mouths via the fountain spigots.

We should start, however, with what started the project: Castle Carr. The architect, Thomas Risley, had been commissioned by Captain Joseph 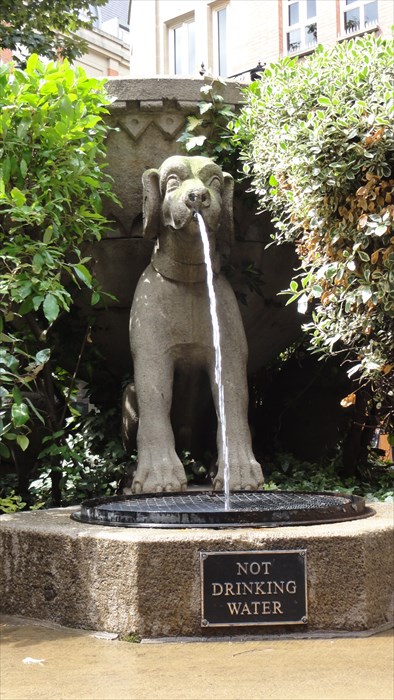 Priestly Edwards to design and build the medieval castle just north of Halifax and Hebden Bridge in 1859.

It took over one hundred men eight years to build, in part because it was enormous, a Hollywood-type extravaganza straight out of a Gothic movie, alone and incongruous on the moors. The banquet hall alone was sixty feet long, its focal point surely the giant fireplace guarded by two stone Talbot hounds (Talbot being a common name for hounds at the time, though today we regard them as the ancestors of Bloodhounds, Beagles and Basset Hounds).  Hounds also guarded the stairway, and kept company with the many hunting trophies mounted on the walls.

At times, the whole project seemed doomed. The castle’s site was too isolated, the building was damp, and locals constantly disputed rights of way. Sadly, Edwards never got to see his amazing home in all its glory. He and his eldest son were both killed in a railway accident before it was finished. Another of his sons saw to it that the building was completed, but it was never used as the Edwards family home. Occasionally, the house served as a hunting lodge, but in truth, it was never fully inhabited, and eventually the estate was sold for the water rights. The castle became derelict and was used for munitions storage during WWII.

In 1949, Castle Carr was put up for sale, but it didn’t attract one single buyer. The weight of the munitions had done a lot of damage, and the Castle was knocked down in 1962/63. While some of the original stonework is scattered around the grounds today, the fountain was rediscovered and restored by Crowther of Avon Lodge and bought by MEPC PLC in 1991 for Trevelyan Square which takes its name from the Trevalyan Chamber Temperance Halls that used to occupy the site.

Today, the estate and its impressive gardens is privately owned, and though it isn’t open to the public, once a year, the water gardens are open for a few hours to showcase the incredible Castle Carr Fountain that reaches a full height of more than 100 feet.