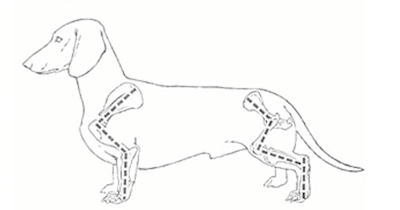 Short legs on a dog are useful for digging, getting the mouth and nose close to the ground, and crawling through tunnels. Short legs, however, can decrease speed and jumping. The best way to have a long stride in a short legged breed like the Dachshund is to have what “dog people” refer to as a “well angulated” front – and having one isn’t just for show dogs.

Much of a dog’s physical ability is a function of how its front end is built. Where the scapula and humerus meet, and where the humerus and the radius/ulna join is an angle, and it’s these angles that provide levers. On the levers are muscles that exert the forces that drive the dog’s body forward, important because bones involved in the dog’s front assembly aren’t articulated with the rest of the body by joints. They’re kept in place by ligaments and muscles.

Dogs with well-angulated front limbs can unfold those angles to reach far forward and push well back. This is important because a dog with “good angulation” in the front can cover more ground with less effort with each stride, and that’s important to any dog whether it’s a backyard warrior or a show dog.

A dog with poor angulation has to use more energy to cover the same distance as the well built dog. Put another way, a poorly built dog poops out faster and is at higher risk for injury.

The well angulated Dachshund can sit on it’s “keel” (chest) as it digs furiously and all we see is a blur – and s/he can do it for a long time.

Image shared with the kind permission of the Dachshund Breed Council