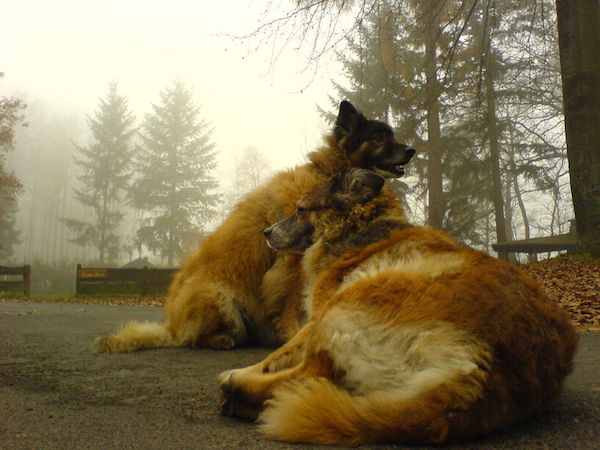 Old German Herding Dogs is an umbrella term for a group of working/herding dogs from (wait for it), Germany!

Before the late 19th century,  any dog that herded and protected sheep in Germany was referred to as an Old German Herding Dog, or German shepherd dog. This changed in 1899 when a formal breed was established by the Society for the German Shepherd Dog (also seen as the German Shepherd Association), a group some readers may recognize as the English translation of the Verein für deutsche Schäferhunde, the club founded by Arthur Meyer and his colleague, Max von Stephanitz of German Shepherd Dog fame.

Our post, however, is not about that fine breed, the GSD, but rather, one of the other “Old German herding dogs,” the Westerwälder Cow Dog. This canine showed up on our radar when we idly revisited the website for The Society for the Conservation of Old and Endangered Livestock Breeds. Back in 2003, the Society had identified the German Pinscher as the Endangered Breed of the Year, and we wondered what canine breed, if any, had taken the Pinscher’s place eighteen years later. Enter the Westerwälder Cow Dog.

Back in the day, the average German family kept seven to ten cows, and by law, they were all kept in the community herd. After the morning milking, the cows grazed until they were full, then moved to an area where they could chew their cuds, quench their thirst from a water tank, and then head back in the afternoon to the best grass in town. It was good to be a cow in those days.

One cowherdsman and his helper tended the cows, and for seven hundred years, one or two Westerwälder Cowdogs helped them control the herds. Not the same one or two cowdogs, mind you, but dogs the herdsmen bred over time to work cattle in the wet and windy mountains (note to reader, that was humor that just happened).  There is written documentation about the use of these cattle-herding dogs in the Westerwäld and Siegen regions dating back to the 15th century: The Nassausch Weisthum, a collection of ancient customary rights written in 1465,  described the dogs that worked with cows, and only cows because their nip on a nose or heel was unsuitable for any other type of livestock. This fact makes the Westerwälder Cow Dog one of the
oldest dogs of which there is written record in Germany.

Possessed with great stamina and a strong protective instinct, these intelligent, assertive, but loving dogs were indispensable to a cowherder. Sadly, only a few of these dogs are left in Germany today.  A breeding stock of about 30-50 adult dogs (along with about 100 crosses) is all that is left of a tradition that is older than most of the better known herding breeds today.  Indeed, Germany’s Society for the Preservation of Old and Endangered Pet Breeds also lists the Westerwälder Cow Dog as extremely endangered and has added it to its Red List.

To our knowledge, the breed isn’t recognized by any kennel club or registry, possibly because no one ever pursued it, or perhaps because some consider the Westerwälder to be a landrace. In staring at scores of photos of the dogs, however, we see phenotypic uniformity, and have read descriptions of work style and temperament that suggest dogs that breed true, and have for hundreds of years. Also, some of you may be looking at the photos and wondering about these dogs’ similarity to other breeds. Indeed, many people do believe that the Westerwälder Cow Dog is behind several of the herding breeds we know today.

Image of a pair of Westerwäld Cow Dogs by Dr. Wolfgang Rost appears here under a GNU Free Documentation License