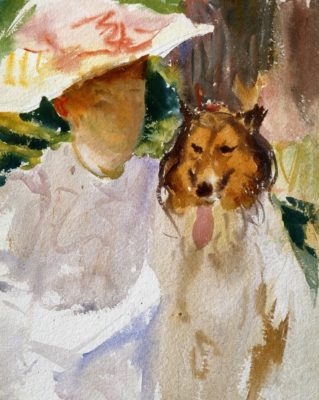 As a dog owner, President Lyndon Johnson was best known for his Beagles, “Him” and “Her,” but he also had several other dogs during his administration, and one of his favorites was a white Collie named “Blanco,” a holiday gift from a 9-year-old girl from Illinois.

Johnson, however, was not the first president to have a white Collie. He was preceded by Calvin Coolidge who had two white Collies, including, “Rob Roy” said to be Coolidge’s very favorite pet among the menagerie of animals he kept.  Prior to Coolidge’s election, enthusiasm for the white Collie was gaining momentum. In the January 1917 issue of The Dog Fancier, S.J. Twyman made mention of breeders specializing in white Collies and raised the question: Ought the white Collie not have a name of its own? He suggested the Columbian Collie, though he didn’t offer an explanation for the choice.

The White Collie hit the peak of its popularity during Coolidge’s term, and in show rings, the percentage of whites shown was statistically close to the other colors being shown. That said, white Collies were also being bred by indiscriminate breeders who had little regard for quality just to meet demand. This led to squabbles among white Collie people alarmed by the number of all-white collies suffering from a lack of type. Some of the problem was resolved with Coolidge’s death and the keenness for white Collies faded. While some fanciers carried on with the cause of the white dogs, enthusiasm wasn’t what it was. Indeed, some breeders came along who regarded the color as defective or a liability in the show ring.

In Collies, the two base color genes are sable (or brown, the dominant color), and tri-colored, or black which is which is black recessive. A Collie puppy will be sable if s/he gets a dominant brown gene from each parent, but if s/he inherits the recessive black gene from each parent, the youngster will be a tri-color. If they get one brown and one black gene, they’ll be sable in appearance, but technically are “tri-factored sables.”

When a hair follicle doesn’t get melanosomes, the hair strand it forms is un-pigmented, white, as in the majority coat of a white Collie or the neck region of colored collies. A study by Izabella Baranowska Körberg found that the white coat in collies is probably caused by alleles for piebald. Of the two alleles for the white spotting gene in collies, one is “fixed,” and one “separates” (piebald). Piebald seems to be the allele responsible for color-headed whites.A white Collie can be the result of breeding two white parents or white factored parents.  The color white is a recessive gene, and depending on the other gene received, the white collie may have tri, sable or blue merle markings that are inherited independently, and can occur in combination with any of them. There is still the presence of sable, tri-color or blue merle markings, and ideally, the white content is 80 per cent.

For a marvelous overview of the history of the white Collie, don’t miss the article presented by Gayle Kaye at Chelsea Collies here.  To learn more about color, read about the work Leigh Anne Clark, PhD is doing.

4 thoughts on “The White Collie”