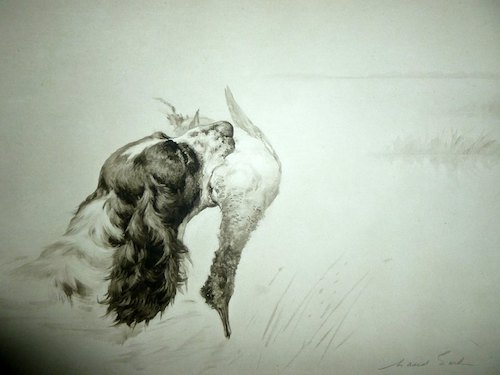 The fabulous Welsh Springer Spaniel would probably be more common if more people ever met one (and some might say this is a good thing). It’s certainly a very old breed that bred true in Wales for centuries. In fact, the Welsh Springer Spaniel has remained virtually unchanged for over 150 years: Welshes are today, and always have been, bred not to be glamorous or exaggerated, but to work, and for that reason, the breed is nicknamed the “working man’s spaniel.”

The breed also once called the “Welsh Starter” was originally worked by hunters using falcons, this before guns were invented. The dog worked tirelessly all day over varied terrain in all manner of weather, and never shied away from cold water or rocky ground. Make no mistake, the Welsh Springer is not related to the English Springer Spaniel. Their shared moniker, “springer spaniel” simply describes the hunting style of both breeds that “spring” game.

Affectionados are rightfully quite proud that there is only one type in their breed, and it is a dog that can work in the field one day, and win in a dog show the next.

2 thoughts on “The “Working Man’s Spaniel” ”