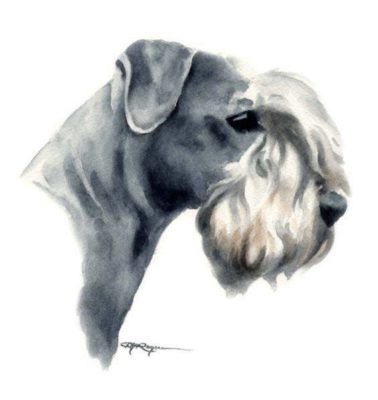 The AKC breed standard for the Cesky Terrier allows for one color – gray – and the following color furnishings: Cream, silver, tan, white and yellow.

The FCI standard, however,  allows for two varieties of coat color: Grey-blue (puppies are born black), and light-coffee-brown (puppies born chocolate brown). “In both colour varieties yellow, grey or white markings are permitted on the head (beard, cheeks), neck, chest, belly, the limbs and round the vent. Sometimes there is also a white collar or a white tip of the tail. The basic colour, however, must always be predominant.”

The aforementioned paragraphs are “easy” part of this post. The harder part requires a geographical history lesson to illustrate the difficulty that Frantisek Horák had in creating his breed, the Cesky Terrier. Bear with us.

Czechoslovakia was created in 1918 and was once was part of the Austro-Hungarian Empire. The creation threw together a culture of Hungarians, Germans, Czechs, Slovakians, Ruthenians, Bohemians, and Moravians, but in 1938, Hitler annexed Bohemia and chunks of what is now the Czech Republic became Sudetenland, where only “racially pure Sudeten Germans” were allowed to live. Hungary annexed Ruthenia, and Poland appropriated the northern part of the Czech Republic.

Frantisek Horák, creator of the Cesky Terrier, often had conversations with another terrier breeder, Mr Červenka of Scottish Terriers and Sealyham Terriers. During one meeting as they watched the two breeds messing about, they discussed the relative working abilities of both. On the basis of Horák’s experience working Scotties, he opined that ‘something’ between both the breeds could lead to a more successful result. Červenka, however, would not be able to continue similar discussions with his fellow kennel club member. A Jew by descent, Červenka was forced to leave his home. He later died in a gas chamber at Auschwitz.

The Communists took over the country in 1948 and it became a satellite of the Soviet Union. Twenty years later, Soviet soldiers invaded the country in response to the Prague Spring uprising. Another twenty years passed, and the Iron Curtain fell, the Communist Party having lost its hold. In 1993, two independent countries emerged out of the CzechSlovak Federal Republic: The Czech Republic and the Slovak Republic. Under the Communists, outside contact was difficult, and breeding dogs equally so. Horák had seen and experienced it all, but later on, he wrote only that “the years 1938-45 were difficult when it came to dog breeding.”

One thought on “Frantisek Horák and Mr Červenka”