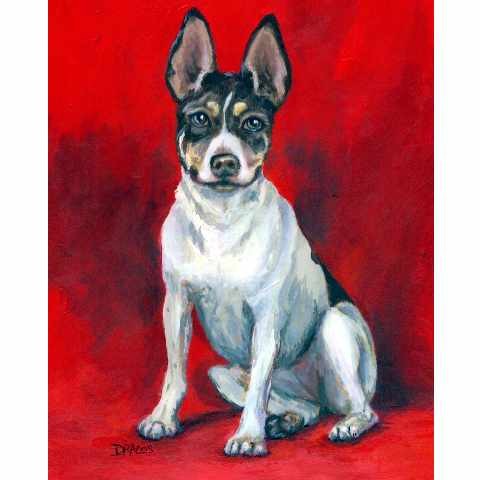 The Rat Terrier has its origins in England going back to at least the early 19th century when its ancestors were called “Feists,” or “Fyce” because of their gameness in going after prey. These dogs were efficient, lightening quick dispatchers of rats, and were not only able to rid the farm of disease spreading vermin, but some brought in winnings from ratting pits where the fastest rat killer might win cash to help feed the family (the record for killing 2,501 rats in a seven hour span in an infested barn belongs to a Rat Terrier).

We always defer to breed experts, but our reading suggests that the earliest dogs in the breed’s ancestry were a cross between the bulldog of the day and the terrier of the day (possibly Manchester Terriers and Smooth Fox Terriers) resulting in the first bull-n-terriers. The resulting dogs had coloring resembling the Manchester Terrier and with ears buttoned over, and they were tenacious, resourceful, fearless, and keen dogs. The breed won over British dog owners almost immediately.

A few “Fyce” appeared in the US in the 1850s and 1860s, but the majority were brought to the USA in the 1890’s. The dogs grew in popularity, but as is human nature, enthusiasts saw room for improvement and over the next thirty years and depending upon the region, different breeds were introduced. To stem the explosion of the rabbit population that threatened crops in 1910, farmers added Whippets, IGs and Smooth Fox Terriers to increase the speed and agility, while in other parts of the country, hunters crossed early Rat Terriers with Beagles to improve their tracking abilities. As this image suggests, there are a lot of breeds that may have gone into the Rattie. That said, the cumulative effect was to bring size down, introduce new colors, and enhance hunting prowess by improving scenting ability. It also produced a mellower Feist, a dog with the temperament seen in Rat Terriers today.

As for the breed’s name, it depends upon the source being consulted. Some maintain that the name comes from the rat baiting dogs early in the breed’s ancestry. Other sources suggest that President Theodore Roosevelt, who kept Rat Terriers as house pets and often hunted with them, coined the name Rat Terrier because he was so impressed with the dogs’ ability to rat.

Whichever source one believes, it was undeniable that Rat Terriers were one of the most popular dog types from the 1920s to the 1940s, and no farm or ranch was without one. Sadly, between the growth of commercial, mechanized farming and the widespread use of chemical pesticides, the breed suffered a sharp decline from the 1950s on. Thanks to breed enthusiasts, bloodlines were maintained and by the 1990’s, the Rat Terrier made a successful comeback. The breed was officially recognized by UKC in 1999, and the AKC in 2013.