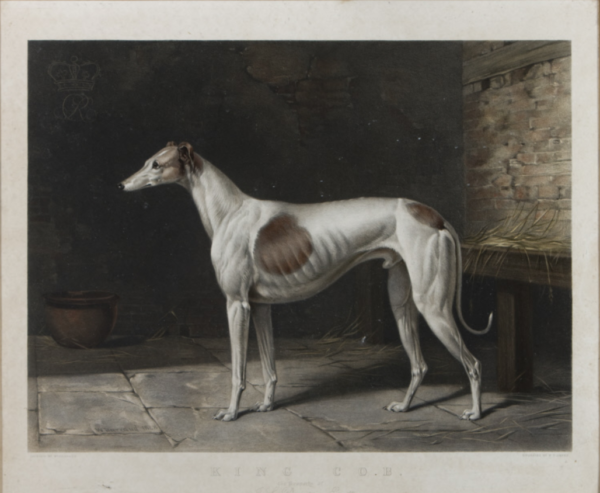 There was a time when breeders would never have dreamt of allowing one of their champion dogs to sire a litter outside of their own kennel. What if one of the subsequent puppies might compete against them one day, or worse, best them on a track?

At the beginning of the nineteenth century, this kind of thinking not only fell by the wayside, but the new century saw the beginning of advertising one’s dog to stud for a fee. Many believe that the first successful stud dog available to the public (for a price, of course) was “King Cob,” a beautiful coursing Greyhound born in 1838 in the UK, and owned by Captain Daintree.

King Cob was also said to be one of two sires used who ‘fixed’ the smooth coat on most of the breed. Interestingly, the dog was said to have Bulldog blood, something rumored to have been introduced to the breed by the eccentric Lord Orford and mentioned again in the book, “The Greyhound” by Hugh Dalzie (1887 edition).

There were few studs at the time who didn’t have one or more lines of King Cob coursing through them, and it’s said that all modern Greyhounds today can trace their lineage back to King Cob, and that all racing Greyhounds can be traced back to two sires,  “Rolla,” and of course, King Cob.