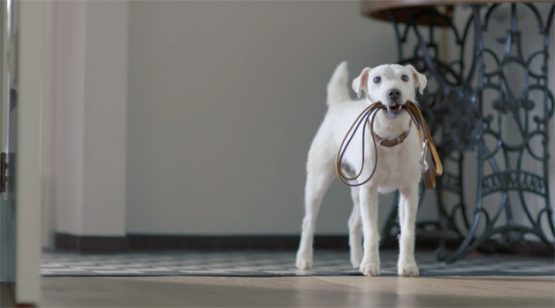 The popular VW commercial lasted longer than than the 2008 VW Polo ad in which a Jack Russell Terrier “sang” the Spencer Davis Group classic, “I’m A Man.” Brave inside the car, but trembling and cowering out of it, the dog’s apparent state of nerves elicited howls (no pun intended) of complaints from British viewers suspecting animal abuse even though the RSPCA found no evidence of it.

The dog at the center of the storm, a six-year-old JRT named “Bear,” was a natural shiverer,  but his stunt double, “Cody” stood on a special motorized plate to make it look as if he was trembling.  The commercial was actually one of VW’s most popular commercials ever, but it was pulled from British TV screens after hundreds of complaints. Both Cody and Bear were owned by Hollywood animal trainer, Steve Berens, who explained: “Bear shivers with excitement, like a kid seeing a roller-coaster for the first time. He can do it on command…”I [would train Cody] to stand on the plate, and then have it vibrate lightly until he got used to it, and by the time we came to film the ad he was happy on it. People who think he is distressed are very much mistaken.” He added, “The animal rights animaniacs mean well, but they often go too far when they don’t know the circumstances of filming. We have the American Humane Society on all shoots, and I’d stop anything before it was harmful, long before they would step in.”

The commercial’s visual effects supervisor Stephane Allender, who added computer animation to make it appear that Bear was singing, confirmed: “All the interior shots of him trembling and cowering – those were all reactions he could do on command.”

In case you’ve forgotten the commercial, or you’d just like to see it again, here you go: