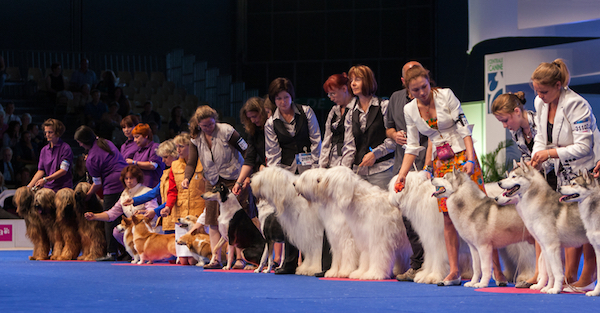 We are using the fabulous Shetland Sheepdog to explain a term that occasionally shows up in the dog fancy, and it’s a phrase we’ve seen used two different ways.

The Sheltie evolved from an ancestry that was a mixture of small spitz type dogs with early working Collies brought to the Shetland Islands to herd sheep. The offspring of those breedings were taken to England where they were further crossed with the King Charles Spaniel, the Pomeranian, and the now extinct Greenland Yakki.  Starting in the early 1900’s, crosses with show Collies were done to improve type.

Because of the mixture of breeds and cross breedings way behind the Sheltie, undesirable traits like a rounded or broad skull, a deep and abrupt stop, a head or legs that are too short for the body  – you get the idea – will sometimes show up.  These are characteristics that point backwards towards the spaniel and spitz, and they aren’t welcomed in today’s Sheltie. “Too much Collie” isn’t welcomed either. The Sheltie is not a miniature Collie, but a dog that looks like one might be regarded as “overdone.” Either of these exaggerations, for lack of a better word, are referred to as being the “drag of the breed,” and it can be seen in other breeds, as well: A Pointer that has traces of houndiness reminiscent of the Foxhounds and Greyhounds in its family tree;  a Chow Chow that looks more like a big Pomeranian (a “Pommie Chow”),  herring gutted Great Danes, and others. Dogs that exhibit a ““return to from whence it came” syndrome as coined by writer, Arliss Paddock, are examples of being a “drag of its breed.”

We’ve also seen this term used to refer to dogs that show exaggerations, dogs that seemed to have been bred with the thinking that if a little of something is good, then a lot of it is even better. In a show ring, judges are challenged to reward the dog who is correct and not overdone, a dog that can contribute the most to his or her breed at that moment in time because ultimately (and contrary to what critics think), a dog show is a stock show in which animals are evaluated as breeding stock. This is why most dog show classes require entries to be intact.