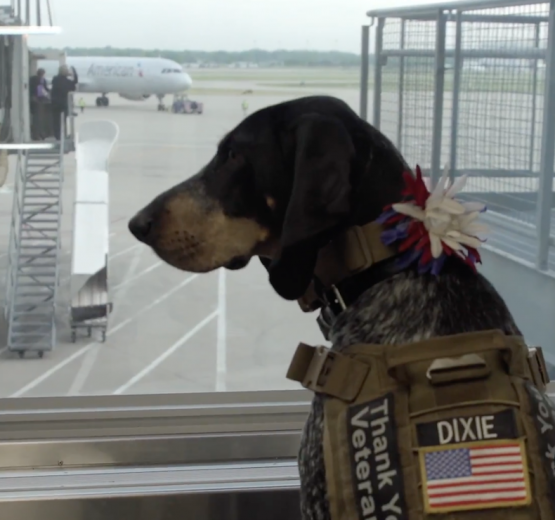 Meet Dixie, a Bluetick Coonhound who has some special talents.

She came to our attention when we read about “Mayberry Man,” a movie version of the “The Andy Griffith Show” being filmed in Danville and Indianapolis, and set to come out in the near future. Playing the dog of the main character makes Dixie a movie star, but she and her owner, Brian Calvert, are also contestants in an upcoming Amazon Prime Video series called “The Pack,” a reality competition sort of like “The Amazing Race,” but with dogs.

Dixie isn’t just a pretty face. She’s an accomplished deer tracker and has recovered several deer as part of her and Brian’s work for the United Blood Trackers Association.

First and foremost, however, Dixie a trained therapy dog who provides comfort to veterans, children with disabilities or anyone else who needs her canine prayer.

Wait, we didn’t mention the praying?

When owner Brian gives the command, “Dixie, pray!” the little lady extends her front legs as if bowing her head to pray, and she doesn’t stand up until Brian says, “Amen!” It’s a crowd pleaser, to be sure, and as a therapy dog, it boosts spirits in much need of lifting. Dixie attends memorial services, funeral processions, and honor flights for veterans, a few of the many events she’s asked to attend.

Brian knows a little something about needing help. Seven years ago, his three beloved dogs died of smoke inhalation in a house fire. He lost everything, but losing the dogs was gut wrenching. Out of his loss came the desire to help others. “This is my way to give back to people and help people,” Brian has said. “I’ve had Dixie described to me by many people: she’s a four-legged ministry. So, that’s how I treat it.”

You can see Dixie in action in the video below: