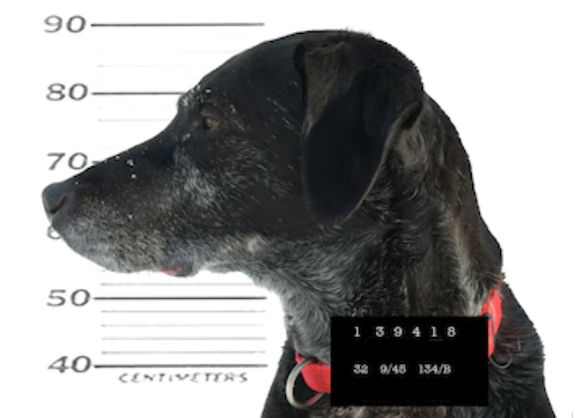 In truth, the crime boss gangster had far greater crimes to his credit including bootlegging, prostitution, gambling, and tax evasion, but those would catch up with him later. Given how posh his cell was at Eastern State,  he could have done worse:

Capone wasn’t the penitentiary’s only famous inmate, however, and the mobster just missed rubbing shoulders with the ruthless and volatile killer, the infamous “Pep the Black.”

In 1924, the black Labrador Retriever was sentenced to a lifetime behind bars without parole for the brutal murder of then-Governor of Pennsylvania, Gifford Pinchot’s cat. He had a mug shot taken and was assigned an identification number (C2559). His name was entered into the prisoner ledger with an alias listed as “A Dog,”  and the reason given for his incarceration was “Murder. ” The sentence: “Life.”

Only Pep never did it. He was framed.

His real crime was worse.

Until now, we confess to yanking your chain just a little. While it’s true that Pep chewed cushions and ended up at the Big House, there is more to the story. 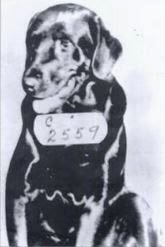 Pep was a gift to Gifford Pinchot from his relatives who bred Labs, and he was a much loved pet, but the cushion chewing inspired an idea in the Governor, and it is probably the earliest version of today’s prison dog programs like Operation Second Chance. Pep’s new role as a “prison mascot” included being a companion and therapy dog to men who probably needed a non-judgemental friend. Pep entered the prison in August, 1924, and as a joke, his paws were “printed,” his picture taken, and an ID number given. Pep was never locked in a cell, and wandered around the prison halls freely enjoying all the head scritches the guards and inmates could give him. He became much loved, and after dying of natural causes, he was buried on the prison grounds of Graterford Prison in 1929, another facility at which he spent time. Pun intended.

As for his notoriety, his story was published in newspapers after word got out and the media saw a great storyline. They wrote that the Governor used his executive powers to sentence his dog to life in prison without parole for killing his wife’s cat, some say because of politics.  Outrage, however, followed, and dog lovers (from as far away as the Philippines) protested the dog’s “sentence” as an outrageous miscarriage of justice.

Pep had gotten his name cleared in 1926 when the Governor’s wife, Cornelia Bryce-Pinchot, issued a statement to the New York Times clearing Pep’s name. As for the prison, it closed in 1971 and is now a museum where his story is still told. Visitors can even purchase a plush toy in his image.  “Pep the Black” (the nickname given to him by inmates) might have been “framed,” but in reality, his life was filled with love and purpose.