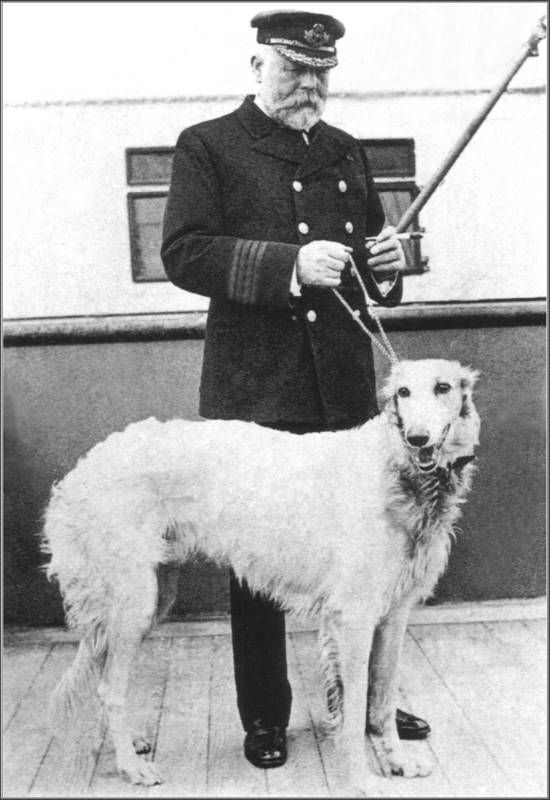 Twelve dogs were known to be aboard the Titanic when it went down into icy waters – dogs that belonged to first class passengers since they were the only ones allowed to bring pets on the voyage. Included were a Toy Poodle, Fox Terrier,French Bulldog and an Airedale. It’s suspected that many more were on board, however, dogs we’ll never know about because they were listed as cargo in the ship’s records, records that were lost. Of the twelve confirmed dogs, only three survived the shipwreck – all small breeds: Two Pomeranians and a Pekingese.
Seen here is Capt. Smith, the Titanic’s captain, with “Ben,” his Russian Wolfhound (named for industrialist, Benjamin Guggenheim, who gave the captain the dog as a gift for his daughter). Ben only spent one night on the ship before it left the dock having been returned home to Smith’s daughter before the ship sailed.
As for Smith, accounts vary on his final hour. There were reports that he had shot himself on the bridge, but another report put him in the water with an infant in tow whom he put on a lifeboat before slipping beneath the water. It is commonly held, however, that Smith followed the marine tradition of remaining aboard his doomed vessel. Several investigations into the Titanic disaster in the United States and England found that Smith was not responsible for the shipwreck.