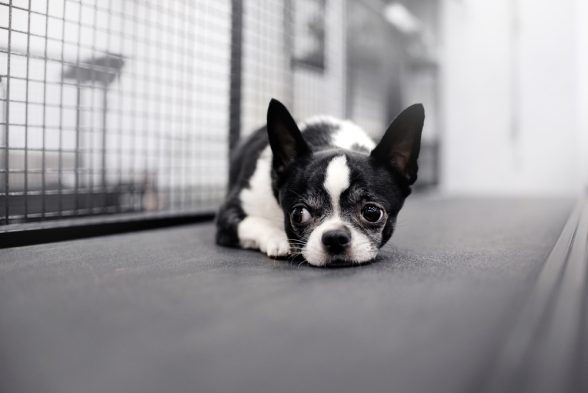 A lot of us know what it means to walk a sweaty “endless mile” on a treadmill, so it may not surprise some of you that the world’s first treadmill was actually a way to punish British prisoners in the early 19th century. Sir William Cubitt, a Civil Engineer, devised a contraption out of disgust at the sloth of prisoners at St. Edmond’s Gaol in Bury. Because he lived in a time that equated fitness and hard work with moral character, he believed that his machine (more of a step machine, really) would reform England’s miscreants.

Assuming it didn’t kill them first. Prisoners spent, on average, six hours a day or more stepping away on spokes of a large paddle wheel attached to gears that pumped out water or crushed grain (leading to the name, treadmill). It was the equivalent of climbing anywhere from 5,000 to 14,000 feet – enough to take them to the halfway point of Everest. Given the poor diet the convicts were already on, injury was common.

Figuratively speaking, however, Cubitt hadn’t reinvented the wheel. Tread wheels were first introduced around the late first century in the Roman Empire to lift heavier weights which replaced winches. Over a thousand years later, treadmills would be used to diagnose lung or heart conditions which is how they made their way into gyms. It was the popularity of jogging in the 1970s that saw a resurgence of the machine, and there was no going back as people became more health conscious, and machines became more sophisticated.

Animals weren’t asked how they felt about treadmills. When farmers in the 19th century needed a power source more consistent than wind, they found that a treadmill powered by a horse did very nicely. In fact, the term, “horse power,” came about as the measure of strength necessary to operate such a machine – the average pulling power of the average draft horse. Goats and sheep weren’t spared as smaller versions were introduced that enabled them to power butter churns, grinding stones, mills and and cream separators. By then, turnspit dogs had long been used to power what looked like hamster wheels. They walked (and walked and walked) and in turn, powered rotisseries. In 1881, Nicholas Potter patented his “Enterprise Dog Power” treadmill, designed to power butter churns and other small farm machines. There were so many subsequent refinements made to Potter’s treadmill that we suggest you read the section on “Dog, sheep and goat treadmills” from the American Artifacts site.  It is the source for the photo below, and yes, that looks like a Shepherd to us, as well. 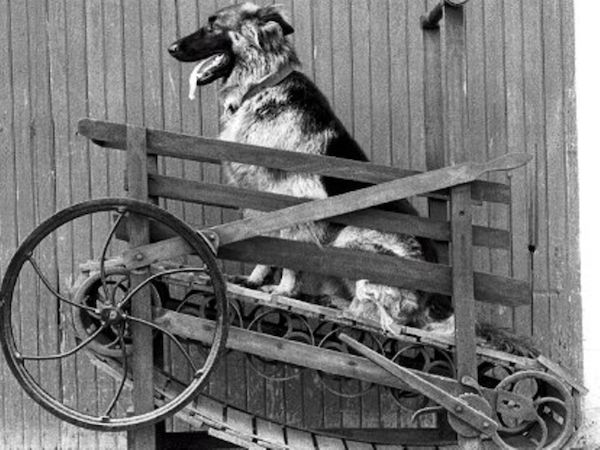 The history of many purebred dogs includes similar work. In her book, Farm Dogs, Jane Vorwald Dohner mentions that Bouviers provided the labor on treadmills to grin grain or churn butter, and according to legend, the Glen of Imaal Terrier also had a role in kitchens by walking in turnspits, essentially a dog-operated rotisserie.

In time, treadmills for dogs would come to be used for fitness and exercise, as many fanciers can tell you. John R. Richards patented the first dog treadmill marketed solely as a dog exercise device in 1939, and since then, adaptations in dog treadmills rival that of human machines. These days, there are motorized treadmills, non-motorized treadmills, and treadmills made from wood that offer flexibility for a dog’s workout. Slatmills work by using rolls and slats to create a space where a dog can walk, and in carpetmills, similar to slatmill, a “carpet” forms a track that turns as a dog walks or runs. There are still devices that look like hamster wheels (but they’re now called “treadwheels”) which are touted as good options for smaller dogs or smaller spaces. There are even underwater treadmills that are tremendous for rehabilitation following an injury.

Unlike turnspit dogs that likely hated their jobs, many dogs today are athletes who perform in agility, FASTCAT, Freestyle, coursing, rally, and more, and the fitter they are, the better they enjoy the activity. Properly introduced to a treadmill, a dog can learn to like it, and the AKC offers advice on how to go about doing it. This isn’t to say that some dogs don’t experience the sentiments we humans have on a treadmill. Exhibit A: The Sheltie below:

Some working dogs are put on treadmills when there aren’t other options. One Placer County, California police dog, a Labrador Retriever named,”King,” jogged on a treadmill after he was forced indoors because of wildfire smoke. Footage of King, shows him trotting on a treadmill while wagging his tail and holding a toy in his mouth.

It isn’t just fitness that leads to fanciers owning a treadmill. Many handlers put their dogs on doggy treadmills set at a certain speed to get them used to keeping a particular trot in a show ring. It teaches them foot timing and the kind of gait they’ll be asked to show a judge. The workout helps develops muscles when it’s not possible to go outside, run in the yard, or visit a park. Regardless of why a treadmill is used, or which one, experienced owners know to never, ever leave their dog unattended when he or she is on one.

If you found this article interesting, buy us a cup of coffee!