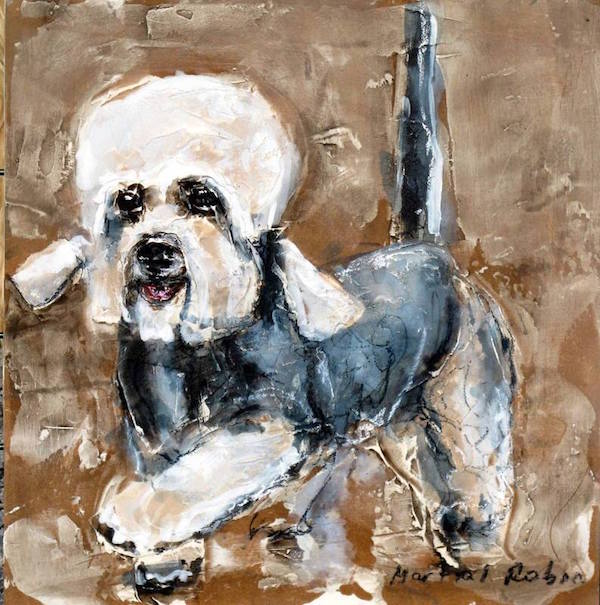 Who among us haven’t had a “pily” sweater?  Some of us make an indoor sport out of picking little fabric balls off our coats and sweaters, grumbling all the while,  but when it comes to the Dandie Dinmont Terrier, a “pily” coat isn’t just wanted, it’s called for in the breed standard: Coat:“…The coat is termed pily or pencilled, the effect of the natural intermingling of the two types of hair.”

What the heck does “pily” look and feel like?

Two-thirds of a Dandie’s body coat is hardish hair (but not wiry), and about one-third is soft, what you might describe as almost “linty” feeling. Old school owners wrote that the coat should be abundant, but not too profuse, but that a sparse coat was as bad as an overly abundant one.  John Stoddart, a blacksmith and key Dandie Dinmont breed in the mid 1800s who built the original wrought-iron kennel runs at the home of the 10th Duke of Buccleuch, used the ‘ term, “pily” coat.‘ He said the coat should not ‘shed ‘down the back, but should lie in ‘pencils’ caused from the under coat being mostly soft hair through which longer and harder hair comes in. The combined result is a texture that feels crisp in our hand, and this is what’s meant by “pily.”

Admittedly, the term was more popular in the late 1800s and isn’t used much anymore, but we think old lexicon is worth understanding when we see it written down.

One thought on “Uh, Your Dog is Pily”