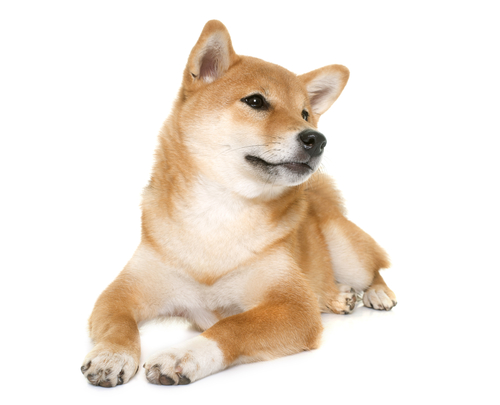 Urajiro is a cream to white color required in the following areas of a Shiba Inu no matter its color: On the sides of the muzzle, the cheeks, inside the ears, the under jaw and upper throat, inside the legs, on the tummy, around the “vent,” and the bottom of the tail. On red Shibas, it’s usually on the throat and chest, and on black and sesames, it’s usually a mark on both sides of the fore chest.

Sometimes known as “countershading,” Urajiro remains a bit of a genetic  mystery because science isn’t certain what causes it.  Some researches think it may be connected to the C or I series, and some think that the gene causing urajiro is unique in that it restricts pigment to the upper part of the dog leaving the underbits and other extremities white.

It’s noted that the Shiba isn’t the only breed that can have urajiro,  Akitas have it too. And since urajiro affects all phaeomelanin pigment,  brindle dogs can be urajiro, as well, and this means that Bulldogs, Siberian Huskies, French Bulldogs, and others may have urajiro.

As an aside, the Shiba Inu Club of America help us out by sharing a primer written by Leslie Ann Engen on how to pronounce the word. She says, ” There are four syllables: u/ra/ji/ro. The u is pronounced oo as in the word food. The r in ra is slightly different from the English r, more like an l or d or a Spanish r without any flip or roll. If you fin it difficult to pronounce, use an English r sound. The a is pronounced like a in father. The gee in the word, gee whiz will do nicely for the ji. And, the r in ro is the same as above; the o as in the word boat. All together now, URAJIRO – oo/ra/gee/ro!”