The Puli is not a stranger to Apple. 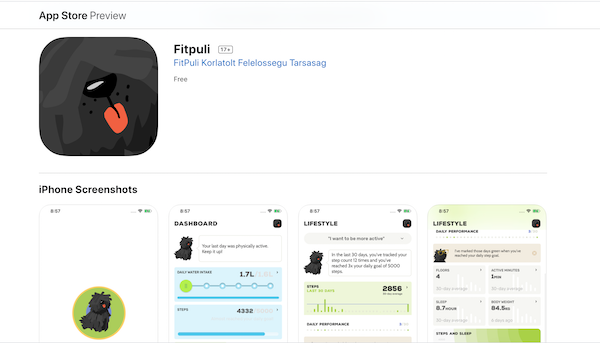 And then the breed appeared on Apple’s “App of the day” which helps users discover news apps such as DOGO. Funny how they chose this breed as the illustration for the app’s explanation: “When you have a pup who just won’t behave, Dogo helps you teach your mischievous mutt the basics. Through the app’s step-by-step instructions and built-in clicker (plus lots of IRL treats and praise), your new best friend will master commands with ease.”

That said, the dog training App grew by 823% in 24 hours after being featured as Apple’s ‘App of the Day’ in 149 countries (personally, we think the Puli sold it). Founded by Lithuanian iOS developer, Tadas Ziemys, his wife and veterinarian, Rasa Gentvilaitė-Žiemienė, and Eliza Hirvensalo (responsible for business development and sales), the app available in 10 languages is now used by more than 2 million dog owners around the world.  “We are super happy and honored to be featured by Apple as this means many new dog-loving families around the world will be using Dogo to teach their dog new skills and strengthen their bond, said Dogo Co-Founder Eliza Hirvensalo.

Dogo was also featured on the official App Store’s Today Tab Artwork help page as a prime example for other developers to follow as they submit their own apps for App of the Day consideration. No word on whether the Puli helped what that, as well.

Thank you, Dagmar, for pointing out DODO to us!