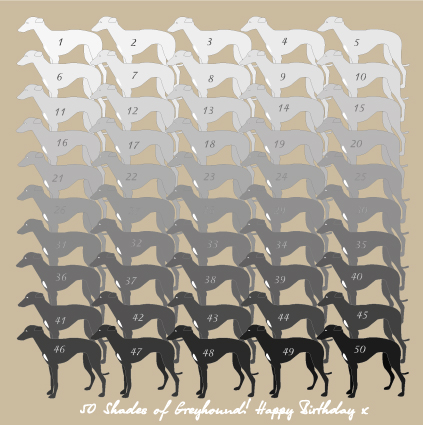 We lied. Our post isn’t about 50 shades of the Greyhound, but about two spellings of the same word: Grey.

“Gray” (spelled with an “a”) is more common in the United States, while “grey” is more common in British English. This is one reason why the breed, Greyhound” is spelled with an “e” and not an “a.”  Several sources indicate that every Greyhound alive today can trace its lineage back to one dog, King Cob, who was whelped in England in 1839, though the breed’s roots in England are far older. But we digress.

Interestingly, grey does appear in a lot of cultural references known to Americans, such as “pass the Grey Poupon,” and Grey Goose vodka, both of which actually originated in France. And then there’s Grey’s Anatomy and Fifty Shades of Grey, both used with an “e” because they’re based on the names of characters named “Grey.”  Widespread adoption of the American spelling in the United States, however, saw the number of instances of the British spelling in English-language texts start to decline in the 1880s.

Most dog people know to spell the dog breed’s name as “Greyhound,” but how to remember how to spell the word all the other times? One simple trick is to remember that gray is typically used in America, while grey is typically used in England. A for American, E for England. Get it? As an aside, to our knowledge, Ireland, Scotland, Wales, Australia, New Zealand, and Canada use the British English spelling.

As for the Greyhound’s name, things get interesting, etymologically speaking.

Some believe that the breed’s name isn’t based on color, but from an Old English word, grīghund, the first part of which is distinct from grǣg and linked to a Norse word for a female dog. Others think that name comes from the Greek word, Graius, gracillius meaning slender or sleek, certainly a feature of this beautiful breed.

There’s been the suggestion that the name is a corruption of the term, gazehound, while another theory is that the breed name is derived from the Latin “gre” or “gradus,” meaning “first rank/grade among dogs.” A final hypothesis is that the name derived from “Greekhound,” since some believe the hound was introduced to England via the Greeks.

Will we ever know for sure? Probably not, but what we do know is that the name probably isn’t based on color. The breed standard regards color as “immaterial,” and one would assume that throughout history, the dogs weren’t all uniformly gray/grey.

We conclude by going “all biblical” on our readers. The only breed of dog mentioned by name in the Bible is (wait for it), the Greyhound (Proverbs 30:29-31, King James Version):

There be three things which do well, yea,
Which are comely in going;
A lion, which is strongest among beasts and
Turneth not away from any;
A greyhound;
A he-goat also.