Back in 1921, a white bulldog consistently appeared each day on the campus of California State University in Fresno (more commonly known as Fresno State) and took a shine to the student body president, Warren Moody and his friends. It was the first year of football for the school, and the kids started taking the dog to games. Technically speaking, there was no official mascot for the school until 1935, but the idea for a Bulldog mascot was born with that white dog.

The first official mascot was named “Touchdown” (real name: Lord Casey McFadden) who was followed by “Moose.” Sadly, “Moose” was hit by train after he escaped his student keeper’s grasp, and upon hearing the news, the Marine Corps donated Moose II.  His eventual replacement was “Diamond,” (the subject of a dog napping hoax in 1962), and upon his retirement, Moose III (Van’s King’s Ransom) came along. Of the mascots, he lived the longest (13 years), and retired in 1973.

“Moosifour”  was next, but it was the early 70s, and school spirit was a unpopular notion at at time many campuses were in turmoil.  Costumed-character mascots came to Fresno State in the 1970s, and it wasn’t until the 1980s that a live Bulldog mascot was revived with “Halftime,” a Bulldog owned by football Coach Jim Sweeney. 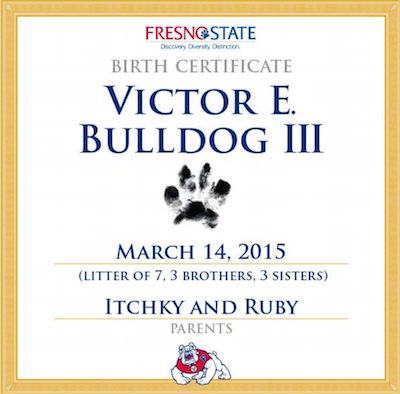 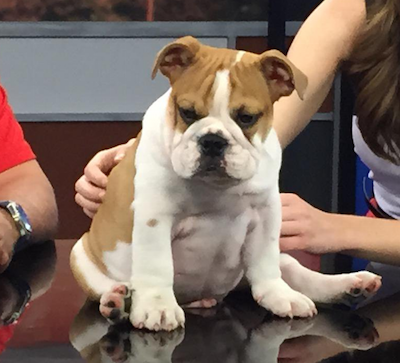 In June of the same year, Fresno State welcomed Victor E. Bulldog III who is cared for by the Fresno State Alumni Association.  This latest dog generated more than 500 followers @VictorEBulldog on Twitter and Instagram in just two days after he was introduced to the public.