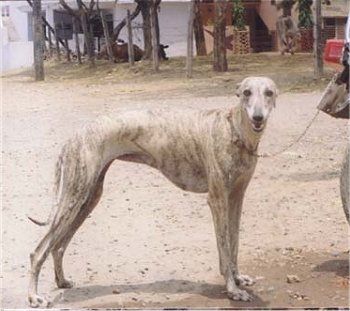 Something exciting going on in India, the beginnings of a rediscovery of native dog breeds that’s leading to heightened appreciation for these dogs. The publication of S. Theodore Baskaran’s The Book of Indian Dogs, the first comprehensive book on Indian breeds in over fifty years, is helping fuel emerging pride by tacitly encouraging Indian dog owners to forgo “western” breeds in favor of their native breeds. The book was sorely needed because almost half of known Indian dog breeds have ceased to exist, and several others are at the risk of dying out because of a perfect storm of factors: A preference for western breeds, such as the Labrador Retriever, a ban on hunting, diminishing game lands caused by increasing population, and interbreeding with other breeds.

One of the earliest Indian breeds to appear in a show ring is the Rampur Hound, a sighthound historically a favorite of Indian nobility and Maharajas for over 300 years. Indigenous to northern India, the breed was developed by the Nawab of Rampur by combining Tazi brought in by the Afghans, Greyhounds, and Afghan Hounds. What the Nawab got was the Tazi’s looks and stalwart character, but the Greyhound’s speed that earned it the nickname, “Greyhound of the Orient.” There are those who claim to have seen a Rampur run at about 60 kilometers per hour, or 37 mph. Eyes set on a longer muzzle give the Rampur a peripheral vision of almost 270 degrees, an incredible advantage to a sighthound. In fact, some say that it wouldn’t be wrong to say that the hound can see behind its head!

We found one source that made reference to the breed coming in three types, or sizes: 1. The Reza, which hunts smaller animals; 2. The Kesari, said to be the rarest of the Rampur Hounds, and 3. The Sahi Shikari, strongly built and temperamental in nature.  Some believe these are the “real” Rampur Hounds, and the others are mixed breeds. We always defer to breed experts and would love feedback on both the sizes and the breed, itself.