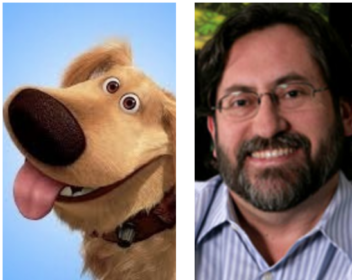 “Squirrel!” It’s shorthand among dog people and refers to a dog suddenly distracted by something the rest of us don’t always see (in our house, it can be a falling leaf).

Most of us picture Arnold Schwarzenegger if we hear the phrase, “I’ll be back!,”and most of us remember the loveable cartoon dog, “Dug,” from the movie,“Up,” when we hear the word, “Squirrel!” said a certain way. Check it out in the video clip below:

“Dug,” is a Golden Retriever who can speak English via a special collar that translates his thoughts into speech. The collar was invented by his former master, Charles Muntz, and Dug is the only dog owned by Muntz who isn’t named after a Greek letter. Keen observers have speculated that since there isn’t a dog named “Delta” in the movie, it’s possible that Dug is Delta. But we digress.

Dug is such a beloved character that he was awarded the Palm Dog Award by British film critics as the best canine performance at Cannes Film Festival.

Bob Peterson, the voice behind Dug,  is an interesting chap by himself. He has a master’s degree in mechanical engineering from Purdue University, but also took computer graphics courses while an undergraduate at Ohio Northern University. As a student, he wrote and drew a cartoon strip, and was hired at Pixar in 1994 as an animator for commercials before becoming an animator on Toy Story. He was the co-director for Up in which he voiced Dug, but also the character, “Alpha.” He went on to be a co-writer for Finding Nemo and Cars 3.

It’s always a bit of a shock to see the face associated with a famous voice, or the voice behind a cartoon character. In your mind’s eye, does Bob Peterson’s face belong to the voice you heard from Dug? We’ll make it easy for you. Go to the 1:44 point in the clip below: