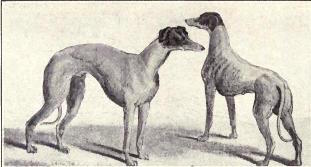 While NPDD dedicates itself to the celebration of purebred dogs through education, we think it’s in the best interest of everyone to also discuss dogs that are more “types,” than breeds, and the Kangaroo Dog fits the bill.

The Kangaroo (for which we admit having a fondness) was at one time a bona fide pest to early settlers in Australia who watched helplessly as the critters destroyed their crops. These marsupials can cover ground at an astounding rate, and the best of the dogs owned by these settlers caught up with the only rarely – and even then, a Kangaroo could simply hop into water to evade the dogs. It’s not like it was in the best interest of a dog to corner a Kangaroo, anyway. A tail with monster strength, and bionic-strength legs could make short work of a dog, so any hound bred to hunt a Kangaroo had to be quick, even quicker witted, and wicked strong.

The marvelous website, Jane’s Dog” offers a description of Kangaroo dogs that you can read here. The short version is that settlers experimented with different crosses, usually between Greyhounds and Deerhounds for speed. In addition to chasing down “Roos” (or trying to), these dogs put food in the pot by catching other game animals such Wallabies and Emus.  They were also flock guardians against dingoes.

It’s hard to know if any  “roo dogs” still exist, but some sources suggest that if there are any, they’re likely to be found in rural communities or remote sheep stations. We’ve comes across rumors that a small group of hunters have been discussing a working registry centered on these dogs’ working ability, but given how little other information we can find on Kangaroo dogs, we’re game to hear from readers who may know more about this than we do particularly our friends “down under.”

Image source not specified (except those with signature on image) – W. E. Mason – Dogs of all Nations, Public Domain, 1915 https://commons.wikimedia.org/w/index.php?curid=6800956. We got it from Wikipedia.