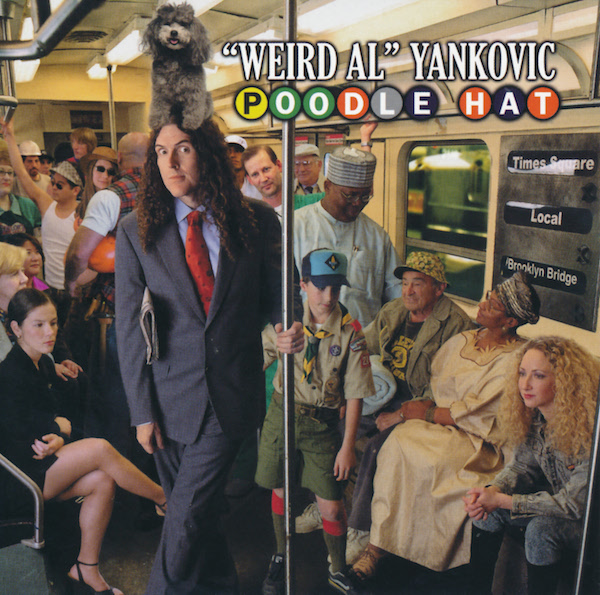 Everything you need to know about “Weird Al Yankovic’s” music can be encapsulated in one of his famous parody songs below. You’ll recognize the tune, the lyrics, not so much:

Al Yankovic, the biggest-selling comedy recording artist of all time, is a pop culture icon now with four Grammy Awards and fifteen nominations, but Alfred Matthew Yankovic was once a shy, nerdy accordion-playing teenager who was his high school’s valedictorian at the age of sixteen. He got his start by sending in homemade tapes to the Dr. Demento Radio Show which was the first to play them. While he attended Cal Poly, Yankovic had a radio show, and it was during this time that he recorded his first real published piece, a parody of the popular “My Sharona” by The Knack called “My Bologna.”

The song was an astounding (and astonishing) success if for no other reason that it was recorded in a men’s room. Forever to be known as the “bathroom recording,” few can fault Yankovic for choosing the acoustically perfect room. Fewer still might have predicted at the time that the song would launch a career that has produced twelve albums, numerous compilations, a box set, movies, videos, and star on the Hollywood Walk of Fame. Who would ever forget his classic music parodies such as “Like a Surgeon,” “Girls Just Want To Have Lunch,” and “I Can’t Watch This,” a spin of “U Can’t Touch This” by MC Hammer.

Poodle Hat, produced in 2003, essentially skewered the popular culture of the early 2000s. It became the first of Yankovic’s records to earn a position on Billboard’s Comedy Albums chart. As you can see from the image, the cover of the CD depicts Yankovic with a Poodle on his head.

The cover was a personal affair, so to speak.  The Poodle was Yankovic’s own dog, Bela. The woman with the sunglasses is his wife, Suzanne. The guy in the surgical scrubs is a friend Joel Miller, the woman with her legs crossed is a first-cousin-once-removed….. virtually everyone in the image was Yankovic’s friend, relative, in-law – even his electrician and the owner of his favorite ice cream shop was included.

His life hasn’t been all rainbows and ponies. In 2004, his parents were killed when a closed fireplace-flue caused their home to fill with carbon monoxide. After graduating from college, Yankovic applied to work at McDonald’s, but was rejected for being overqualified. He hasn’t always gotten permission to parody songs. Weird Al wrote a parody of Paul McCartney’s “Live and Let Die” which Yankovic called “Chicken Pot Pie,” but McCartney, a staunch vegetarian, denied him the right to publish it.

We close with a Yankovic quote which somehow seems so “Yankovic-y:” I don’t really look at myself as the kind of person who craves attention, but I’ve never been to therapy so there’s probably a lot of stuff about myself that I don’t know.