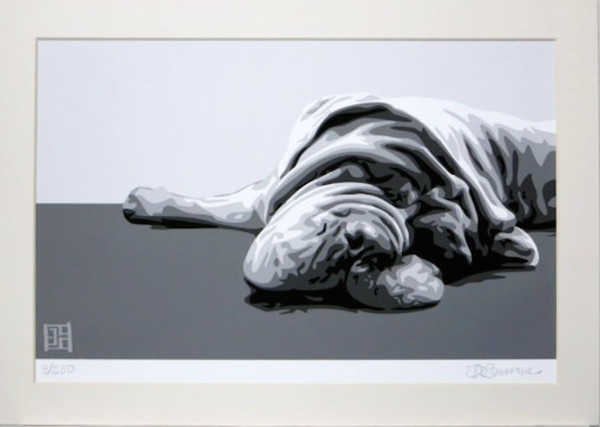 On this site, WHaM does not refer to the English musical duo of George Michael and Andrew Ridgeley, though who of a certain age doesn’t remember, “Wake Me Up Before You Go-Go,” “Careless Whisper,” or “Everything She Wants?”
No, if you’re a fan or fancier of the breed in this image, you already know that the “WHaM” acronym served to help everyone else not in the breed remember a few key features when evaluating a Neapolitan Mastiff: Wrinkle, Head and Mass.
This was particularly important in the early days of AKC recognition when some AKC judges had had little exposure to the breed, and breed fanciers were concerned that AKC acceptance would morph their breed into the “great American show dog:” A dog with flashy reach and drive, but lacking breed type. The WHaM acronym served to remind judges that this was a large sized dog with a massive head covered in heavy, loose wrinkled skin and dewlaps meant to scare the bejeebers out of an intruder. These are loyal dogs who are good with their family, but scaring a bad guy was “mission accomplished,” and their otherworldly appearance was – and is – a huge part of breed type.
The “WHaM” acronym was coined by Peggy Wolfe, president of the United States Neapolitan Mastiff Club at the time of AKC recognition.  When the late Dr. Theo Kjellstrom told Wolfe that her breed needed a one-sentence phrase that judges could remember, WHaM was born. It helped to keep the Neapolitan from becoming a dog that resembled a different breed, but there were those who thought the opposite happened, and that judges were rewarding the biggest, most wrinkle-headed dog in their ring.
Our sense in reading about WHaM is that in hindsight, the acronym served its purpose in inspiring a greater curiosity in the breed on the part of judges, and that lead to learning that WHaM spoke to only part of the dog. The whole “mastino” needed to be considered, and WHaM just might have needed to include an extra “M” in its spelling: M for movement.
That said, by and large, most now recognize that the Neapolitan Mastiff should be massive, imposing, and have epic wrinkles, but it also has to be balanced and sound to be able to do its job.
Image: Neapolitan Mastiff by emilyburrowes is available as a print here.