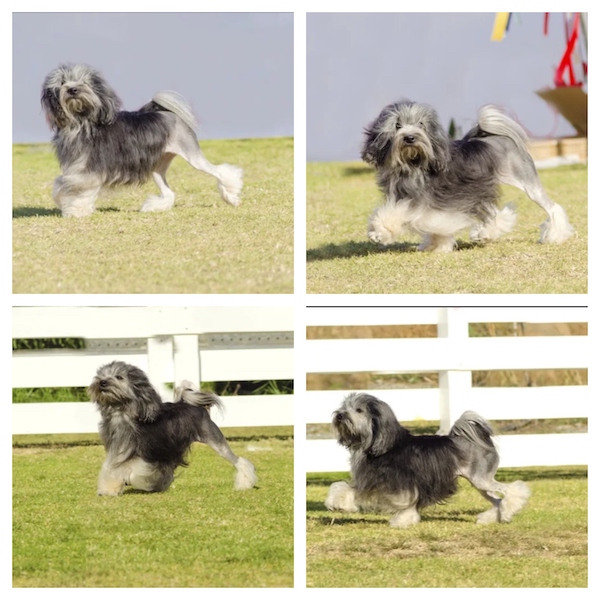 The very first line of the Löwchen’s AKC breed standard reads, “A small, bright, and lively dog.” The UKC standard has an identical first line, and the FCI standard includes similar language: “A small intelligent dog, gay with a lively and alert expression.”

The position of a dog’s head telegraphs the dog’s disposition, and in this breed, the head is carried high and proudly (as you can see in the collage).

Why this head carriage? Because these are alert and curious dogs who want to know what is going on!  Not for nothing, then, is the head the most important feature of the Löwchen (next to his distinctive clip), this according to the Löwchen Illustrated Breed Standard.

A slightly arched neck of good length that fits smoothly into the shoulders and backline is, of course, important because at the other end of it is that head. The head has a flat and broad back skull,  the same length as its width which is broader than it is in a Lhasa Apso, but never narrow. The ideal backskull is equal in length between the ears, to the length from occiput to the stop. It’s basically square in appearance. Behind the ears, the head ever so gently rounds, almost in a half circle.

When viewed from the front, the widest portion of the head is between the ears.  It is important to ascertain this by hand. In puppies, the skull is a bit rounded, but in an adult, one should feel for an almost flat top skull from ear to ear. The skull is fractionally longer than the muzzle, even 2/3 longer.

The muzzle is fairly broad, straight, and not too short. The stop well defined, but moderate. The true Lowchen face is never flat, but this is not a Poodle. Too much slope detracts from the overall expression which should be tender but alert. Much of this expression is attributed to eyes set well into the skull: Large, roundish, set well apart, and forward-looking eyes that are a bit soft and very sweet.

Mind you, the Löwchen is not a “head-breed,”  but the head plays an important part of breed type, and we just skimmed the surface. You might find this article interesting as it hints at a European interpretation of the head that is different from how it is viewed in the United States, but all Löwchen standards call for short heads that are a hallmark of the breed.

We share this information about the head not only to educate but to encourage you to admire this aspect of the breed when you see it.