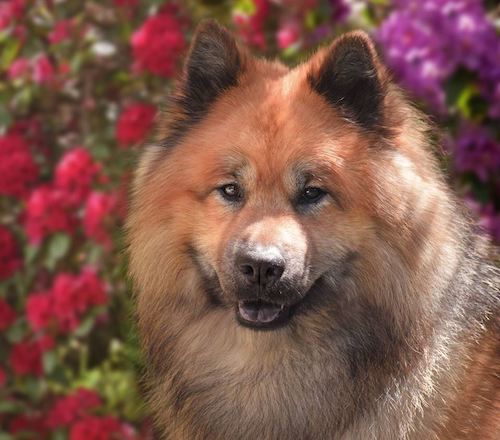 The breed of the dog you see here is considered to be one of six so-called “basal” breeds.

There’s no simple explanation of what “basal” means, and because we’re not bioinformatics scientists or phylogeneticists, we’ll happily welcome the input of people who are. Our own “See Spot Run” understanding of “basal” is that in the world of phylogenetics (the study of the evolutionary relationships of organisms), “basal” refers to a “split” in the family tree, the direction of one of the roots of that family tree). Within large groups such as canines, “basal” roughly means “closer to the root than the great majority.”

A 2004 study found nine breeds that were genetically divergent. A 2010 study refined this further and found thirteen breeds that were genetically divergent from “modern breeds:” The Basenji, Saluki, Afghan, Samoyed, Canaan dog, New Guinea Singing Dog, dingo, Chow Chow, Chinese Shar-Pei, Akita, Alaskan Malamute, Siberian Husky, and the American Eskimo Dog. A 2012 study confirmed the genetic divergence of the thirteen breeds from the 2010 study, and added three more: The Eurasier, the Finnish Spitz, and the Shiba Inu. The same study indicated that while all thirteen breeds exhibited genetic divergence, not all of them were historically considered to be “ancient breeds.” Of those thirteen, six were found to “basal,” meaning that their DNA was less mixed than the others. These were the Basenji, Shar-Pei, Saluki, Akita, Finnish Spitz and Eurasier.

Photo of an Eurasier by Marissa Armstrong first shared on our Facebook page. Be sure get your 2019 calendar, “Dogs of National Purebred Dog Day” which features a Eurasier! Find it here.