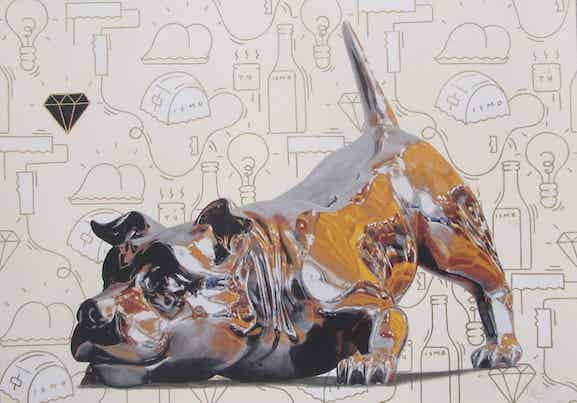 It’s hard to believe to that this bully isn’t a metallic sculpture, but it was, in fact, created 100% with spray paint by Puerto Rican street artist, Joshua Santos Rivera, better known as Bik Ismo. Entitled “Perreo Intenso,” the prize winning mural was created for the Raw Project at the Jose De Diego Middle School during Art Basel Miami in 2014. The piece rendered in a style called hyperrealism took about four days to complete, and reflected objects and scenes from the surrounding area.

You can watch Bik Ismo at work in the video below:

Often referred to as “The Chrome Master,” for obvious reasons, Joshua has worked as a muralist and graffiti artist for the last 22 years.  His work is characterized by the logo of a toaster accompanied by the phrase, “Seguimos Tostando” (let’s keep toasting!)

You can see more of his amazing metallic art here.