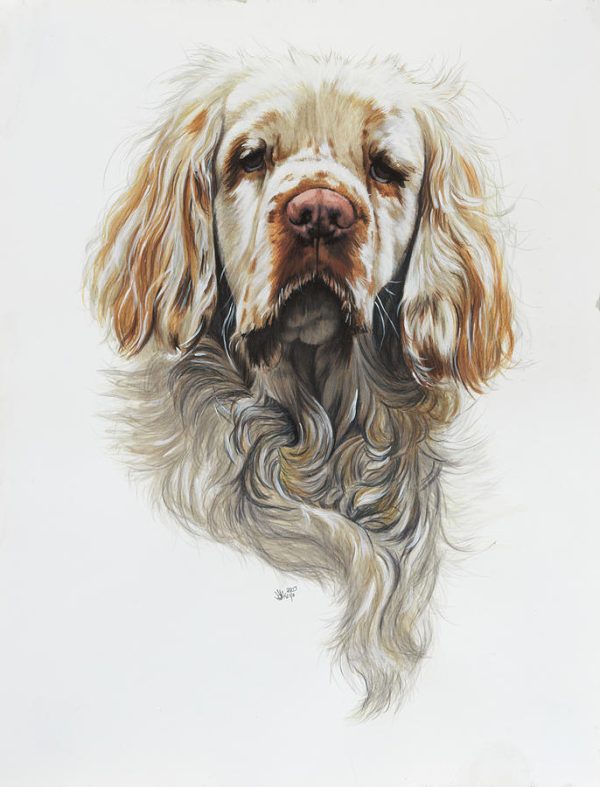 Join us on a tortured path to understanding, or, more accurately, making an educated guess as to what the Clumber Spaniel and the late Princess Diana have in common.

We want you start where we did, and that was with a sentence we came across in a book on dog art: “Earl Spencer was the first exhibitor of Clumber Spaniels.”  A bold statement like this always piques our interest, and we wanted to know more about Earl Spencer.

We might have reached our ultimate conclusion sooner had we not made the mistake in thinking that Earl Spencer was a name like Earl Scruggs, the famous banjo player, or Earl Warren, Chief Justice of the Supreme Court.
We came at it from a different direction.

We’re all familiar with the word, peer, as in, “to be judged by a jury of one’s peers,” or referring to one’s friends and acquaintances as “one’s peers.”

A body of peers is a “peerage,” but that word isn’t used much in America because it mostly refers to members of the British nobility, a part of a legal system with both hereditary and lifetime titles. These titles include Duke/Duchess, Marquess/Marchioness, Viscount/Viscountess, Lord/Lady,  Baron/Baroness, and Earl/Countess. You can see where we’re going with this.

The title of Earl Spencer, a hereditary title of nobility, was created in 1765 for John Spencer, great-grandson of the 1st Duke of Marlborough, and a member of the prominent Spencer family.

It is an educated guess that the “Earl Spencer” in the sentence that started our research was an ancestor of Princess Diana. We came across this page out of Volume 1 of The Kennel Club Calendar and Stud Book, and as you can see, Earl Spencer appears as having shown two dogs, “Bustler” and “Sam” at the first Great International Dog Show held at the Agriculture Hall in Islington in 1863:

As we studied the birthdates of the Earls of Spencer, we determined that the 6th Earl would have been too young to show (he was six years old in 1863), and the 4th Earl had already died. It must have been John Spencer, 5th Earl Spencer, born in 1835 who exhibited the Clumber Spaniels as he would have been twenty-eight years old at the time. Elsewhere in the same document,  entries show that Earl Spencer of Althorp Park exhibited several Clumbers. Not only has Althorp been the ancestral home of the Spencers for more than 500 years, it is the current home of the 9th Earl Spencer, and the site of Princess Diana’s grave.

To “seal the deal,”  W. D. Drury writes in his book, “British Dogs, Their Points, Selection, And Show Preparation:”

The strain was for long highly prized by several large landowners in whose kennels it came to be established; of these, the principal were the Dukes of Newcastle, Norfolk, and Portland, Earls Spencer and Manvers, Lord Arundell of Wardour, and Mr. Foljambe of Osberton. Mr. Foljambe’s name, indeed, is intimately associated with the pedigrees of the best show specimens.

Further on in the book he wrote:

Another good Clumber, and a great prize winner – a better dog than anything now being exhibited – was Trusty, bred by Earl Spencer, and exhibited for years by Mr. H. B. Spurgin, Northampton.

We don’t know which Earl was the last to own a Clumber Spaniel, but in 2021, the current Earl (who is a godson of Her Majesty the Queen) shared a video on Twitter of “Joey,” his Cocker Spaniel puppy who liked to steal slippers:

If and when we learn more about Clumber Spaniels in the Spencer family, we’ll amend this post.