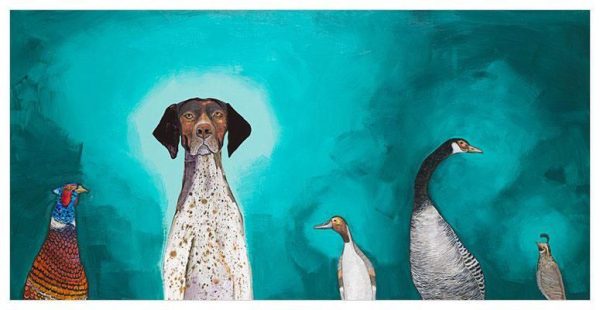 The first German Shorthaired Pointer was entered in the German stud book back in 1872, but it took a little over 50 years for the breed to show up on the radar of American hunters. Once it did, however, Americans were smitten with a dog that could hunt upland birds, waterfowl, and track and dispatch larger animals.

Interestingly, a German Shorthaired Pointer bred for field trials in Europe is actually a foot-hunting type of dog.  While European breeders work to achieve mostly the same qualities as American breeders, Europeans walk at their field trials, so a lightning fast dog is counterproductive for them.

Some might say this is a waste of the dog’s versatility in the field since this is one of the few hunting breeds that can perform virtually all gundog roles, from being a pointer to serving as a retriever. He can hunt upland birds and waterfowl, as well as rabbits, raccoons, and deer,  and he can do it on many different types of terrain. Still, the breed caught on slowly in America because American hunters were used to working with more specialized breeds. While the German Shorthaired Pointer is more versatile than the Pointer, it was often beaten in field trials early on which focused (seemingly exclusively) on hunting speed (circle back to European field trials).

That said, the German Shorthaired Pointer did grow in popularity as hunters began to “get a clue” that this was one terrifically versatile breed.  By the 70s, the GSP was one of the most commonly used gundogs in the United States, and dogs became more successful at field trials. The GSP became especially popular in the middle of the country where hunters were especially enthusiastic about its effectiveness at hunting quail and pheasant.

If you doubt the breed’s knack for spotting birds anywhere, any time, check out the video below:

As for our image, you will enjoy the video below where the artist, Eli Halpin, give us a close up of the painting you see at the top. It is now on exhibit at The Tree House in Austin Texas. You can see (and shop!) more of Eli’s work here.