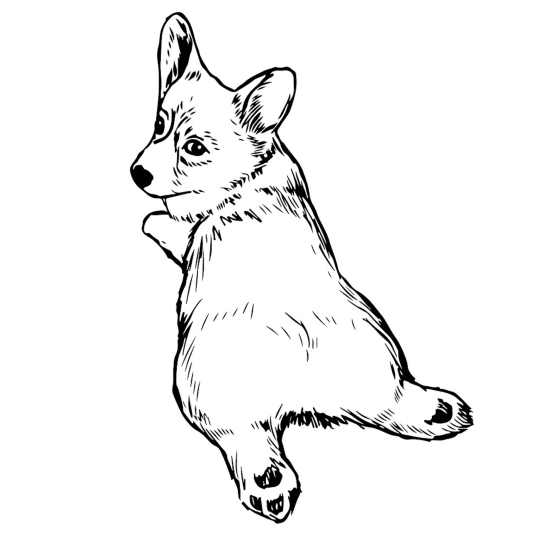 As important as it is to be aware of what is acceptable in a breed for the show ring or breeding,  it’s equally important to know what isn’t. In the Pembroke Welsh Corgi, a self colored dog with any area of white on their back between their withers and tail, on the sides between elbows and back of hindquarters, or on their ears is a very serious color fault in a show ring.

If you were to draw an imaginary horizontal line from the dog’s elbow through his stifle joint, white should not extend far into the upper arm and shoulder blade areas, nor should any appear on the dog’s thigh other than a slim stifle trim. Some red or tan, however pale, must appear on a white-marked black dog.

There is a name for when a Corgi’s body is mostly white with red, black, or sable markings: “Whitelies,” and is it considered so serious that breeding such a dog is strongly discouraged. Though these dogs can make marvelous pets as their personalities are not different from a properly marked Corgi, no reputable breeder would purposefully breed for this. As such, a Whitelie can be an indication of poor breeding practices and beg the question: What else did the breeder not consider in this breeding, such as health testing.

Neither do Pembroke Welsh Corgis come in merle, and any so-called ”merle Pembroke” is actually a mixed breed, and likely the result of a breeding with a Cardigan Welsh Corgi. While blue merle is a recognized Cardigan color, there is no such thing as a merle Pembroke corgi.  Buyer beware: One might see a red or blue merle Corgis that looks like a Pembroke, and they’ve even been given a name: the “American Corgi.” These are not purebred Corgis, and they are not recognized by any reputable registry. They are the result of having crossed a standard color Pembroke Welsh Corgi with a merle Cardigan Welsh Corgi or a merle Australian shepherd. There is also something called a “Cowboy Corgi,” again, not a purebred dog, but a cross between an Australian Cattle Dog.

Don’t be fooled by marketing ploys, and don’t settle for anything less than a purebred Pembroke Welsh Corgi bred by a preservation breeder.

Other serious faults include “fluffies,”  mismarks, and “bluies,” and they’ll be discussed in a future post.