It might be a stretch to say that John was a party animal, but he was fun loving, and enjoyed fine living and good entertainment. He liked the company of others, loved attending social gatherings, and had a particular passion for sport (which is to say hunting). We may never know if his decision to follow in the footsteps of his father and grandfather took friends and family by surprise, given his taste for an “un-clergy-like” lifestyle, but a calling is a calling, and flamboyant John (or Jack, to those closest to him) became “Parson John” of Anglican church.

Hunting had always given John immense pleasure, and it wasn’t uncommon for the good parson to ride fifty miles on horseback to get to a designated hunting location, then travel the fifty miles back in the black of night. He soon became a fixture, if not a popular figure, in Britain’s fox hunting community. Within the church, however, not so much. He was often passed over for promotions, and his superiors were of the opinion that he spent too much time hunting (according to John’s own diary, he hunted 75 days out of 90). And then there was that nickname. Men of God weren’t supposed to be known among the parishioners as “The Sporting Parson.” Bishop Phillpotts, in particular, felt that the idea of a “Sporting Parson” was unseemly and would only bring embarrassment and trouble to the church. 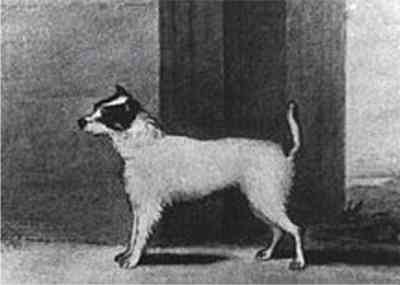 Compounding his situation was that John’s love of hunting led to a deep interest in dogs that was one more thing to distract him from his duties. He had owned a pack of Otter Hounds, and also kept white terriers that, in his day, were simply called “fox terriers.” His strain of terriers bred strictly for working were intelligent dogs that could keep up with fast Foxhounds over rough, rolling fields.  One day, however, John saw “Trump,” a dog that embodied a “type” for which he’d been looking.  She was owned by a local milkman who took her on his milk deliveries. The size of a vixen, Trump had a more distinctive color pattern than John’s dogs, and a thick and wavy coat on a body that “wouldn’t quit,” which is to say that she had a sturdy frame built for work and endurance. John bought her on the spot, and she would go on to become the foundation of the terriers John bred. It would take several generations of careful breeding, but within twelve years John created his ideal dog, and it became highly popular among fellow hunting enthusiasts.

John didn’t crop the ears or docked the tails of his dogs, contrary to the practice of the time. He wasn’t interested in a show dog, he wanted a working dog, and this is an interesting aspect to a man who was one of the founders of The Kennel Club (Britain’s version of the AKC). He was a Kennel Club member for the remainder of his life, and became a show judge, though John didn’t show his own dogs (he said, “the difference between my dogs and show dogs can be likened to the difference between wild and cultivated flowers”).  Even so, he wrote the first recognized breed standard for the Fox Terrier as a show dog, a standard that remained mostly unchanged over a 132 years.

John never changed his friendly disposition (it would eventually win over stuffy Bishop Phillpotts), nor his love of hunting (which he pursued until near the end of his life), and certainly not his passion for his dogs. Don Rainwater and Kellie Rainwater wrote in their book, The Jack Russell Terrier Canine Companion Or Demon Dog:

One day, in the spring of 1883 and for unknown reasons, [John]  gathered together all of his sermons, as well as his documents, records, and papers that recorded the history of his work with the Fox Terrier. He brought the documents out to his veranda overlooking the rolling hills of the country side and spread them out on a table in front of him, pouring over the decades of memories. A few hours later, one of his sons would arrive to visit and find hundreds of pages of his father’s documents floating freely in the breeze. Pages were scattered throughout the property and along the countryside…[he] was found by his son deceased of natural causes, still sitting on his veranda with his records spread out before him.

A few years after John’s death, Kennel Club members announced at their annual showing that the name of his dogs would be officially changed to the Jack Russell Terrier. You know about the breed, and that there are Parson Terriers and Russell Terriers, but we thought you might want to know a little more about the man behind them.

One thought on “You Know His Dog, Now Meet John”