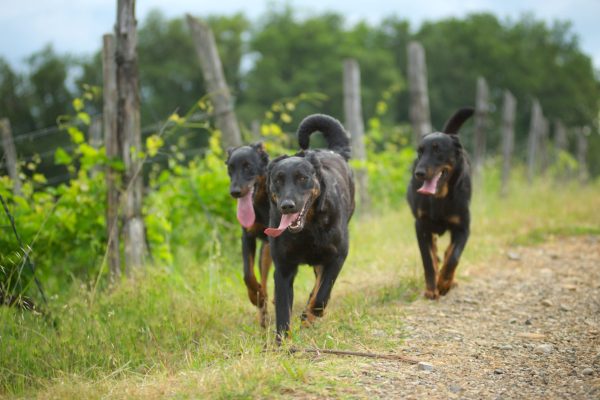 The American Kennel Club recognizes 202 dog breeds at the time of this writing, and to be honest, it’s a little surprising to us that of all the AKC breeds that work by herding, driving, pulling, and hunting, only two mention distances in their respective breed standards.

To be clear, descriptions of some breeds do make mention of distance, just not in their standards.  The Old English Sheepdog Club of America, for instance, writes on its website that when moved at slower speeds, an Old English Sheepdog will naturally amble or pace, and when used to move stock, they can go for miles at this speed (and as “drovers’ dogs, they did.”)  No mention of it in the standard.

The Puli herding description mentions that historically, “Flocks were kept on huge pastures and vast plains. Pulik gathered the stock from the villages and drove them from one area to another to graze. This often involved moving the stock for miles along the roads and by crops...”

Nothing in the standard.

Alaskan Malamutes, one of the most powerful dogs of the modern age with the capacity to carry heavy loads, were historically canine engines that “helped transport materials over miles of land for a long period of time.” Siberian Huskies have been known to pull dog sleds over hundreds of miles, and Foxhounds have run 20-30 miles during a hunt.

No mention of distances in their respective standards

It’s no big thing, but as dog nerds, we often find ourselves in the minutiae of wording in breed standards, and given that endurance has been an important aspect of so many breeds, we just found it curious, that’s all.

Are you curious about which two breeds do mention distances in their standards?

If you are also a dog nerd, it won’t surprise you to learn that the Beauceron is one of them. The breed has long herded sheep and cattle in France, and we can’t improve upon what the breed standard says: Beaucerons were used to move herds of 200 to 300 head traveling up to 50 miles per day without showing signs of exhaustion.

The other breed, however, might catch you off guard. From the Otterhound’s AKC standard:  “Gait: The Otterhound moves freely with forward reach and rear drive. The gait is smooth, effortless, and capable of being maintained for many miles.”

Image: “Three Beaucerons Running in the countryside near a vineyard” by Anna Pozzi/Adobe Stock Photo