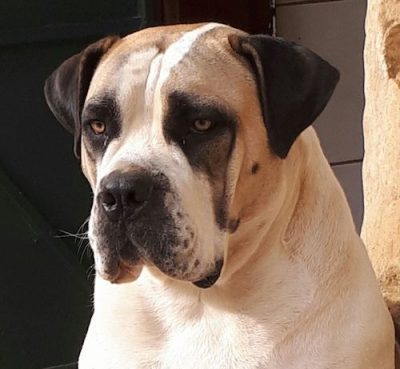 While doing a little research on the Boerboel, we came across several mentions of the Ysterberg Mastiff. We wondered if this was a breed unknown to us, or something else. As it turns out, the answer isn’t very clear, at least not to us.

Some write that the Ysterberg Mastiff is a Boerboel bloodline that existed in the early 1940s in South Africa. Bred by Klaas van Waveren before the Boerboel was officially recognized, the Ysterberg has been described the oldest living bloodline in Boerboel history.

Some sources indicate, however, that the Ysterberg Mastiff was part of the foundation stock of the Boerboel; in other words, a breed unto itself. When the first Boerboel organization was founded in 1983, Ysterberg dogs were included because their conformation fell within the parameters of what founders were looking for in the Boerboel.

In 2010, however, like-minded individuals came to realize that their vision for the Boerboel was very different from what Boerboel organizers had in mind. In order to protect Ysterberg bloodlines, these folks decided to resurrect the original Ysterberg type of the past by isolating those lines out of Boerboels, and the Ysterberg Mastiff Breed Council was formed.  For the past decade, Ysterberg Mastiff bloodline breeders have adhered to a controlled program of the Council which makes a distinction between the Boerboel, South African Black Mastiff, Ysterberg Mastiff™ and South African Mastiff®.

Evidently, there was enough confusion associated with the names, “Ysterberg Mastiff” and “Boerboel” that in 2019, the Council re-branded itself and changed the organization’s name from Ysterberg Mastiff™ Breed Council to “South African Mastiff®  – powered by Ysterberg since 1948.”

There are those who maintain that early on, some dogs were registered as Boerboels, even though they were Ysterberg Mastiffs, and as proof, they cite issues of size and coloring appearing in Boerboel litters even today. Original Ysterberg Mastiffs could be piebald and Irish marked, and they were big! Indeed, when comparing a Ysterberg to a Boerboel, the former is a frame size or two bigger.

We always defer to breed experts and welcome additional insights into this topic!