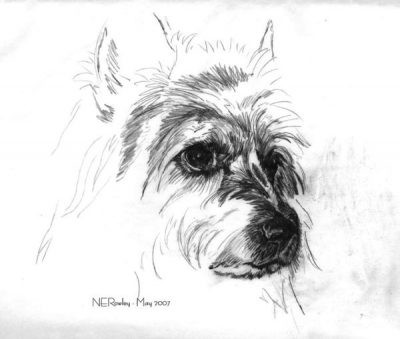 Writer, Alex Robinson, calls this land “the tenth circle of hell,” while naturalist and TV presenter, Steve Backshall, calls it the “home of deadly.” The rest of us know the place as Australia. Beautiful, breathtaking Australia.

It’s also home to wildlife that can “off” a person on land, in the sea, and at points in between. There are some 140 species of land snakes and 32 species of sea snakes there, and twelve of them can kill you. In fact, the world’s most venomous snake, the Inland Taipan is in south-western Queensland. One of the world’s most dangerous spiders, the Sydney funnel-web (Atrax robustus) is in Australia. The aggressive and dangerous Saltwater Crocodile is in Australia.  The world’s largest carnivorous marsupial known for its maniacal displays of teeth-baring, the Tasmanian Devil, is (say it with us) in Australia.

You get the drift. It’s not a place for sissy dogs.

Nevertheless, early Australians needed help controlling rodents around stations (ranches), gold mines and homesteads. Kelpies, fabulous ranch and herding dogs, weren’t up to that specific task. Need lead to deed, and so it was that settlers began breeding and tweaking smaller dogs out of the short legged, rough coated dogs that had come on the First Fleet ships to arrive in the country from Britain. The dogs they developed were small and didn’t need to eat very much, and they could kill their own food. They were necessarily rough-coated to withstand the bush, and had a large ruff and apron to protect them from snake bites. Small feet could handle any terrain.

Initially, these dogs were called Broken-Coated Terriers, and were said to have “more courage per pound of live weight” than any other dog on earth. Given the lethal vermin they were expected to control, who could argue with that description? These dogs had to have the grit of their pioneer owners.

The first Australian dog show that took place in Hobart, Tasmania was held by the newly minted Society for the Improvement in the Breed of Dogs (later to change its name to ‘Canine Society’), and in the 1880s, classes were held for “broken-coated terriers of over seven pounds in weight or under seven pounds, further subdivided into blue, sandy, or any color other than blue or sandy,” (another source, however, indicates that the dogs were first exhibited as the “broken-coated terrier of blackish blue sheen”). At a show held in Melbourne in 1864, 25 Rough coated Terriers (15 dogs and 10 bitches) over seven pounds were entered as well as another seven under seven pounds. The breed was renamed the Australian Terrier in 1892, forty two years after it was officially recognized, but it wasn’t until 1909 that the Australian Terrier Club received confirmation from the Victorian Poultry and Dog Society (the AKC of its time)  that the name ‘Australian Terrier’ would be allowed.

Show dog or not, the Aussie has retained its prowess with vermin. Present day owners report a “leap-twist-and-pounce-from-behind” tactic in exterminating snakes, deadly or otherwise. In Australia, there are reports of numbers as high as 60,000 snake bites to dogs every year, the Tiger and Brown snakes responsible for most of them. A good research project would be to determine the breeds of the bitten dogs, and how many, if any, are Australian Terriers.

Terrier owners, wear the only t-shirt that proclaims the terrier motto:  No Guts No Glory 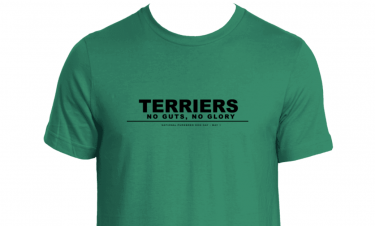 Get your shirt (available in color and black or white print) here.