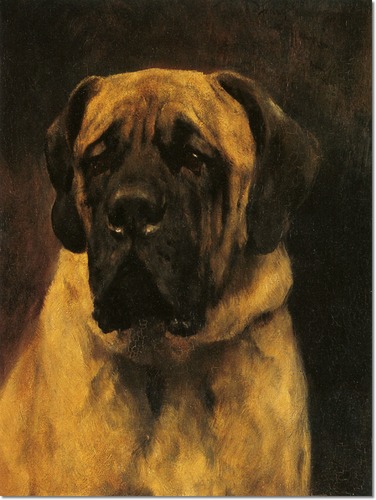 Mastiffs were well established as a presence in the dog show ring by 1882, but with the breed’s straightforward manner and expressive eyes, it had become a favorite subject among artists, as well. This piece painted in 1930 by Arthur Wardle now hangs the the AKC Museum of the Dog in St. Louis, a “must visit” if you’re ever in the area. There are walking trails for you and your dogs, drinking water everywhere, and the museum is not only open for your dogs, you’re expected to take them in! In addition to artwork, there are antique dog collars, a display dedicated to working dogs (military, police and rescue), and porcelains.  The 14,000 sq. ft. facility offers lectures and classes, and a library containing over three thousand books and dog-related publications that is invaluable to those researching canine history.

Frank T. Sabella was the first contributor of art with his gift donation of several paintings including an oil painting the terrier, “Bob,”  painted by George Earl, and a portrait of a Newfoundland by English artist Horatio Henry Couldery.

2 thoughts on “AKC Museum of the Dog”