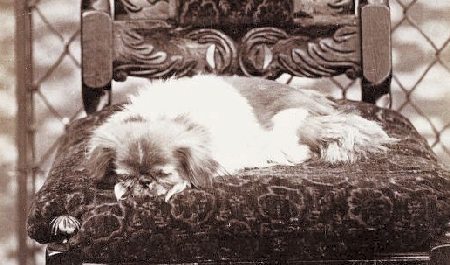 Her name was “Looty,” and her abduction from the Imperial Summer Palace in Peking established the Pekingese in Great Britain at a time when the breed was being destroyed in huge numbers by members of the revolutionary movement.
It was 1860, and the height of the Second Opium War. When French and British troops reached the Imperial Palace, they stole everything in sight—including the Imperial family’s five Pekingese dogs. According to one account: “British Soldiers in Peking entered the seemingly empty Summer Palace and there found five little dogs near the body of a lady – possibly the Emperor’s aunt – who had committed suicide upon hearing the sound of the approaching troops. These five little dogs were bundled up and taken back to England.”
British Captain John Hart Dunne wrote his view of the event in his journal: “I have been able to retain a good many trifles that I bought in the French camp, also a pretty little dog, a real Chinese sleeve dog. It has silver bells round its neck. People say, it is the most perfect little beauty they have ever seen.”
Two of the five dogs who were claimed by Admiral John Hay eventually found their way to Goodwood Castle where they became the property of the Duke of Gordon. Two others were given to the Duchess of Richmond. The fifth dog, that “little beauty,” of whom Dunne wrote, was presented to Queen Victoria who christened the dog “Looty.”
“Looty” lived at Buckingham Palace where she was somewhat lonesome until she overcame her initial shock, and then she went on to live a sumptuous life of luxury at Windsor Palace until her death in 1872.
Image of the real life “Looty”

One thought on ““Looty,” the Pilfered Pekingese”